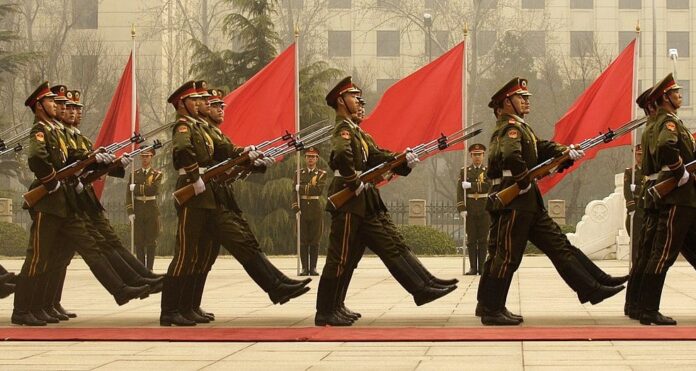 China has long denied accusations concerning the vile mistreatment of its Uyghur Muslim population. To prove their point Bejing released a series of videos featuring some of their captives smiling and giving thanks for the wonderful lifestyle the Chinese government has provided their unworthy selves with.

It’s part of a massive campaign by the Chinese government to cover up the atrocities being carried out against an entire ethnic group. Just as wartorn P.O.W.s are often forced to lie about their prison camps resembling country clubs or suffer the consequences, you can’t pull one over on Captain Obvious.

In a few of the videos released earlier this year, some of the Uyghurs, whose acting abilities fall short, are not overly convincing as they shake their fists at former U.S. Secretary of State Mike Pompeo for declaring what’s going on in the Xinjiang region, home of the Uyghurs, as genocide. As they appear to strongly denounce the U.S., their eyes are saying “help us.”

Chinese officials swear their Muslim slaves weren’t prompted to sing praises to the Communist Party. Everything seen and heard in the videos is completely spontaneous. The off-the-chart emotional outpourings were the real deal. Their masters may not have told them what to say, but they were certainly aware of the direction things better go. The videos were released to foreign media via a series of news conferences.

In their typical hocus-pocus fashion, the Associated Press produced an incriminating text out of thin air that caught the commies with their knickers down. As they say, if it looks and smells like a monkey on a grill in a wet market…

The text was received by government offices in Karamay, located in the heart of the Uyghurs territory. It directed each office in the region to hunt down a Mandarin-speaking Uyghur. The chosen individuals were to be used in videos condemning the U.S., and in particular, Mike Pompeo, for their absurd and false “anti-China remarks.”

The text clearly spelled out how things better go down. “Express a clear position on Pompeo’s remarks, for example: “I firmly oppose Pompeo’s anti-Chinese remarks, and I am very angry about them,” it read. “Express your feelings of loving the party, the country, and Xinjiang (I am Chinese, I love my motherland, I am happy at work and in life, and so on).”

Based on verified inhumane abuses beyond comprehension, the only way any Uyghur would defend their government’s actions would be by force, and this, only after considering death as a viable alternative.

Albert Zhang, a researcher at the Australian Strategic Policy Institute gave his take on the latest finding. “There’s something instinctive about these videos which feels ingenuine, but the significance is that there’s hard evidence here that the Chinese government is requesting these kinds of videos.” Zhang co-authored an in-depth report concerning the reality of the situation versus what China would have the world believe.

A spokesperson in the Xinjiang Province, Xu Guixiang, caught off guard when asked about the text, couldn’t deny it without a minute to think first. He finally came out with, “the government has never issued this kind of notice or made this kind of request.” He claimed no knowledge of the videos.

“This didn’t require government organization. Many among the masses made this totally spontaneously,” he said, suggesting the Uyghurs made them on their own. “Pompeo’s anti-China remarks arose the intense resentment of various ethnic groups in Xinjiang.” Who wants to buy a bridge?

Beijing is catching a lot of heat internationally as more nations are focusing on China’s horrid human rights violations. The thousands already in captivity are housed in overcrowded filthy conditions. They are forced into labor for which they aren’t paid. Pregnant women have had babies ripped from their wombs without anesthesia, and they are continually gang-raped by guards. Others have been tortured and even murdered.

Whether levied by the U.S. or any number of other nations, thus far, sanctions have done nothing to stop this modern-day slavery. Will it take military power to set China straight? It might. What do you think? How should this be handled?