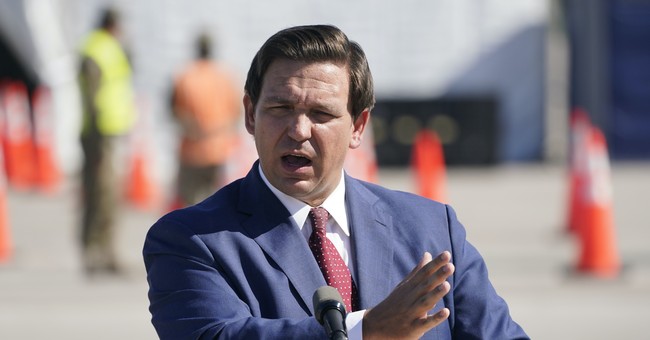 In education, it seems, CRT’s all the rage.

And while the cultural procession leading to that fact may have taken time, the controversial concept’s incorporation by schools appears to have happened quickly.

In a relatively brief amount of time, we arrived at stories such as these:

Someone not loving public education’s turn toward racial awareness: the governor of Florida.

In fact, he said he’ll be cracking down on CRT Chuck E. Cheese style — by playing “Whack-A-Mole all over” Florida to pound it where it pops.

He also commented on cosmetics:

“You know, you can put lipstick on a pig, it’s still a pig.”

As for a plan to pummel the promotion of prejudice, Ron’s ready to go hog wild:

“So what we’re doing, the Department, the Florida Board of Education is meeting, and they are addressing this. And I told them they need to address this. And we’ve got to do it.”

The way the governor sees it, CRT’s an affront to folks footing the bill:

“I mean, first of all, it’s offensive. Here we are, celebrating tax savings. It’s offensive to the taxpayer that they would be asked to fund Critical Race Theory.”

“[I]t’s also…based on false history, when they try to look back and denigrate the founding fathers, denigrate the American Revolution, doing all these different things that even very liberal historians say is not supported by the facts.”

The man’s got his mallet in hand:

“[I]f we have to play Whack-A-Mole all over this state, stopping this critical race theory, we will do it.”

Florida’s not alone. As I covered last month, Idaho became the first state to ban CRT in schools.

And on Saturday, the Texas Senate passed HB3979, which will 86 such curriculum from the classroom.

The issue looks to be reaching a boiling point.

That district’s good at making the news:

Back to Gov. Ron, he told the crowd it’s wrong that taxpayers “would be asked to fund teaching kids to hate their country and to hate each other.”

Masters in Justice: UT-Austin Grads Walk out of Commencement Over ‘Anti-Black’ School Song