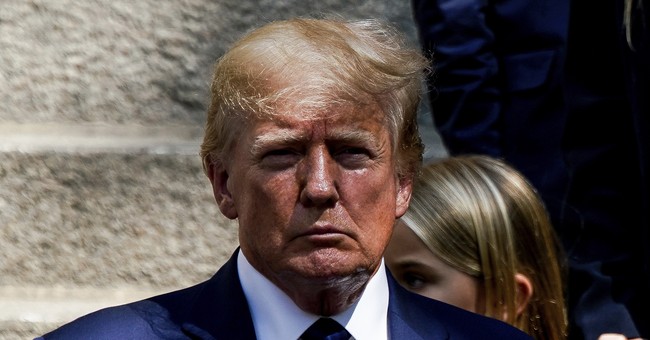 As we reported earlier, podcast host Sam Harris had a lot of people talking when he acknowledged that it was a conspiracy to suppress the Hunter Biden laptop to hurt President Donald Trump and help Joe Biden win. “But I think it was warranted,” he said. It was more important to defeat Trump, “Hunter Biden literally could have had the corpses of children in his basement, I would not have cared.”

“It was a conspiracy out in the open,” Harris declared. “If there was an asteroid hurdling towards Earth, and we got in a room together with all our friends and had a conversation about what we could do to deflect the course — is that a conspiracy?”

As my colleague Brandon Morse noted, this is how insane some on the left have become with their Trump Derangement Syndrome — they will throw anything and everything, any principles they may have claimed to have had under the bus to defeat him.

So Harris threw any credibility he may have had with anyone under the bus with his words.

But now, having been called out on the insanity of his words, Harris is backpedaling a bit, trying to explain himself. He should have just taken the “L” and shut up, because, of course, he managed to make it worse.

Here’s how he tried to clean it up in a Twitter thread.

There is a podcast clip circulating that seems to be confusing many people about my views on Trump (which is understandable because I wasn’t speaking very clearly). So, for what it’s worth, here is what I was trying to say:

I was essentially arguing for a principle of self-defense (where there’s a continuum of proportionate force that is appropriate and necessary to use). I’ve always viewed Trump as a very dangerous person to elect as president of a fake university let alone the US, and when he became a sitting president who would not commit to a peaceful transfer of power, I viewed him as more dangerous still. (However, I’ve never been under any illusion that he is Orange Hitler.)

On the podcast, I was speaking narrowly about the wisdom and propriety of ignoring the Hunter Biden laptop story until after the election. I’ve always thought that this was a very hard call, ethically and journalistically. But given what happened with the Anthony Weiner laptop in the previous election, I think it was probably the right call.

Nothing I said on that podcast was meant to suggest that the Democrats would have been right to commit election fraud or take other illegal measures to deny Trump the presidency (nor do I think they did that).

You can spin all you want now, your words were clear. We heard what you said. You weren’t just talking about “ignoring” it, you were talking about suppressing it, acknowledging what was done to the NY Post. The media lied about it and called it Russian disinformation.

So here’s the thing: If you have to suppress the truth to win, then there are several problems with your assessment besides the fact that you have no principles. It means that the Bad Orange Man isn’t what you claim he is because people still want to vote for him and have him win. It also means it’s you who can’t handle the truth. And you’re wondering “journalistically” about the call? If you’re not printing the truth and you know you’re not, you’re not a journalist. That’s what was going on with the media who lied and spun the story of the laptop, Sam. It wasn’t a “hard call” — they lied, they were acting as Democratic operatives, not journalists.

But Sam is representative of a lot of liberals. The ends justify the means and the bodies in the basement didn’t matter, just as long as you got rid of Trump.