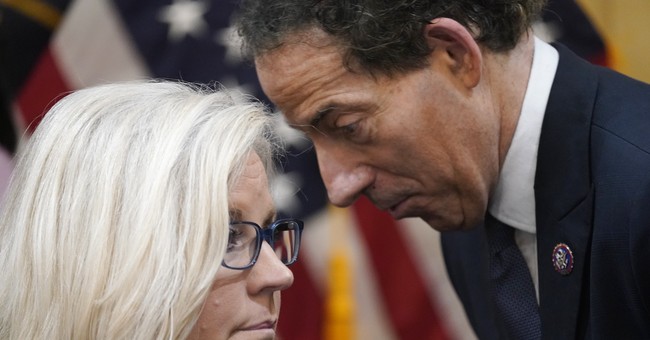 Time to start the countdown. Four days are left until Rep. Liz Cheney (R-WY) gets the boot in her August 16 primary in Wyoming.

Cheney has been desperately trying to pull anything out of the hat to win. She’s had her father appeal to people to vote for her by attacking President Donald Trump. She’s also appealed to Democrats to vote for her. Both those things, of course, would be more likely to make Wyoming’s very Republican voters vote for her opponent.

But Cheney has one last whine left. She doesn’t talk about Wyoming or anything that might concern voters with all the issues that are crushing the people now — she talks about her obsession to get Trump. She attacks Trump for questioning the election because she says that endangers our Republic.

So I have some questions about that. Who is she standing with now? She’s standing with the Democrats in their efforts to attack Republicans and get Trump. The same people who have questioned elections in the past and called them illegitimate.

Here’s the guy she is standing with on her Jan. 6 Committee — Rep. Jamie Raskin (D-MD), objecting to the electors for Trump.

She’s part of a Committee that wouldn’t allow any evidence to rebut the narrative that they have been pushing against Trump, including that he called on people to act peacefully.

So much for the rule of law or even honesty from Liz Cheney. She’s standing with the people who want to drive the country to the far left and destroy the Republic. So much for her being a Republican.

But the latest poll on her race seals her fate. According to the 2022 Wyoming Primary Election Survey conducted by the University of Wyoming’s Survey & Analysis Center, her opponent, Trump-endorsed Harriet Hageman, is up by nearly 30 points — 57.4 percent to Cheney at 27.8 percent.

Almost 98 percent of Democrats are for her — that pretty much says it all right there. Except that won’t help her much as there aren’t that many Democrats in Wyoming, so even if they all crossed over to vote for her, as we see with this poll, it isn’t going to do much.

She thinks that she’s going to run for president in 2024, but she still doesn’t get that the Democrats, after using her, will throw her under the bus and go back to hating her family as they have in the past. She’s tanked her future and there’s only one role left — her being the “Republican” political commentator on CNN or MSNBC.