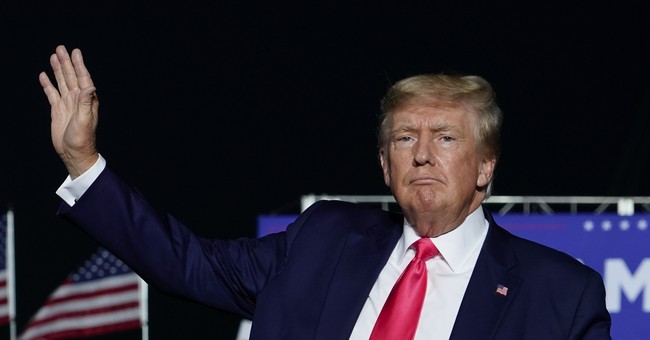 During his short press conference Thursday, Attorney General Merrick Garland gave no real inclination as to the severity of the actual documents being sought by the Department of Justice in former president Donald Trump’s home at Mar-a-Lago.

All we’d known up until Thursday night is that the documents were related to the Presidential Records Act of the 1970s, and that the National Archives were demanding the remaining documents still in Trump’s possession. The raid happened despite the fact that Trump’s lawyers had been cooperating with federal agents in the months prior.

However, a new report from the Washington Post strongly indicates that the materials being sought by the FBI were far more than just presidential records. They are, apparently, a matter of grave national security.

Classified documents relating to nuclear weapons were among the items FBI agents sought in a search of former president Donald Trump’s Florida residence on Monday, according to people familiar with the investigation.

Experts in classified information said the unusual search underscores deep concern among government officials about the types of information they thought could be located at Trump’s Mar-a-Lago Club and potentially in danger of falling into the wrong hands.

The people who described some of the material that agents were seeking spoke on the condition of anonymity to discuss an ongoing investigation. They did not offer additional details about what type of information the agents were seeking, including whether it involved weapons belonging to the United States or some other nation. Nor did they say if such documents were recovered as part of the search. A Trump spokesman did not immediately respond to a request for comment. The Justice Department and FBI declined to comment.

If this is true, then we have a major, major problem. Actually, we have multiple problems.

The first problem: How or why did it take government agencies 18 months after Trump left office to determine that they were gone/possibly in his possession? Whether it concerns our weapons or someone else’s, this isn’t stuff you should lose track of. I get that Trump walking out with a dozen or more boxes of documents can be troubling, but someone should have figured this out long ago. This sort of information is sensitive, classified, and protected for a reason.

The second problem: If they are in Trump’s possession and not in the capable(?) hands of the intelligence community, then Trump has really screwed up here. If this is as serious as the Post and their sources say it is, then this is the sort of information foreign powers will do anything to get their hands on. You don’t just stick it in the closet and forget about it. If it turns out to be true and Trump has this, the Republican Party really needs to rethink its commitment to Trump. The GOP is usually on the side of strong national security, not actively working against it.

The third problem: And, on that note, if this is as serious as the Justice Department’s sources are making out to be, then holy mother of God why are you leaking it to the press, you absolute morons? This is something that could quite literally get someone killed, alter the balance of global powers, and generally make certain people’s lives a nightmarish hellscape… and you’re just tossing it out to reporters like this is good to chum the waters with.

I had already thought that everyone involved in this story was grossly incompetent, and somehow they have decided they are dead set on proving it.

With all of that said, I remain skeptical for a few reasons:

Like I said, you don’t just leak that sensitive national security documents like those pertaining to nuclear secrets are just floating around out there.
It was pretty commonly accepted that the Presidential Records Act was just a front, and everyone was hoping something from January 6, 2021, was going to be part of what the feds discovered.
If you think Trump has this information, you tell those in Congress – including the Republicans – on the committees with high security clearances what the issue is, because you can guarantee that those Republicans will call the de facto head of their party and say “Please for the love of God get those back to D.C. in a hurry.”

And, to be quite honest, the media and the FBI have both done stellar jobs debasing themselves throughout the last six years. Both institutions are distrusted by the American public, and for good reason. The FBI pursued a largely fake dossier, with agents that had admitted biases and agendas against Trump. The media has spent the last six years breathlessly telling us the “walls are closing in” after each and every news tidbit came out — and many of those were just as fake as the dossier.

But, if even a sliver of this story is true, then we have a very, very big problem on our hands. Yet, it won’t matter because the same people who will attack Trump have ruined their credibility before we got to this point, and the same people who defend Trump would defend him if he launched our entire nuclear arsenal from 5th Avenue.