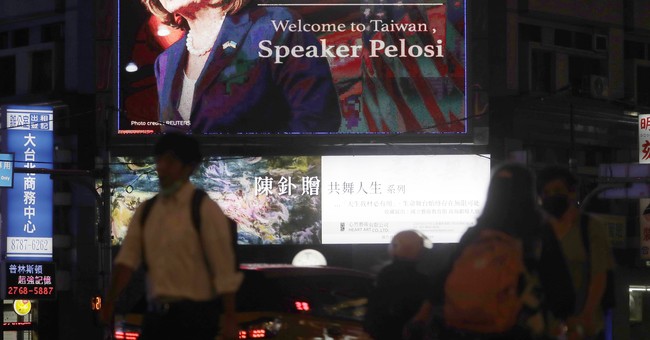 Nancy Pelosi’s son is the second largest investor in a $22 million Chinese company whose senior executive was arrested in a fraud investigation, DailyMail.com can reveal, raising questions about his secretive visit to Taiwan with his mother.

As well as investing, Paul Pelosi Jr, 53, also worked for the telecoms company, Borqs Technologies, in a board or consultancy role, Securities and Exchange Commission documents show.

Wow, this feels like d?j? vu all over again. Just substitute the name “Hunter Biden” for “Paul Pelosi Jr.” and the story would still sound credible.

For his “consultancy,” Pelosi was given 700,000 shares of stock in the company. At one time he was the second-largest shareholder in the Beijing-based firm, although it’s unclear if that’s still the case today. Either way, it must be nice. Borqs is a telecoms company specializing in the “Internet of Things” products and is “listed on the Nasdaq stock exchange with a current market capitalization of $22 million,” according to the Mail.

The news raises questions because Paul Jr. just accompanied his mother to Taiwan on an official trip. What the heck was he doing there? His name did not appear on the official delegation list released by the Speaker’s office; it was only after press inquiries that her spokesman revealed that Paul was acting as her “escort” for the trip. (Wish they’d picked a different word, but that’s just me.) Pelosi had been appointed to the boards of two lithium mining companies in 2020 and 2021–and Taiwan is a lithium mining capital. Coincidence?.

Meanwhile, Pelosi’s husband Paul Sr. has been in the news too with a recent DUI arrest and highly questionable stock trades. As RedState’s Jim Thompson reported in July:

Paul bought $5 million in stock options (20,000) in Nvidia – a computer-chip company that makes chips used in advanced computer gaming. This was (just by coincidence) ahead of a vote next week in Congress that will provide $52 billion in subsidies to the domestic semi-conductor sector.

I don’t know about you, but that sure sounds like insider trading to me. As Charlie Kirk summed it up nicely back in 2019:

What is it with these politicians’ spawn getting these lucrative gigs that they often don’t even seem qualified for? Joe Biden’s son Hunter traveled aboard Air Force Two with his father to China in 2013. Of course, now we know he made millions in “boards of directors” jobs in the country. He also pocketed serious change as he served on the board of a Ukrainian gas firm called Burisma Holdings Ltd. despite having no qualifications or relevant experience for the job.

John Kerry’s stepson Chris Heinz was a business partner of Hunter Biden, but even he realized that serving on the Burisma board stunk to high heaven, so the two parted ways. “The lack of judgment in this matter was a major catalyst for Mr. Heinz ending his business relationships with Mr. [Devon] Archer and Mr. Biden,” Heinz spokesman Bastardi told the Washington Post.

There are plenty more relatives and children of politicians out there being named to the boards of directors of various vague-sounding companies. One thing is clear: the Swamp can be a very profitable place for your entire family.