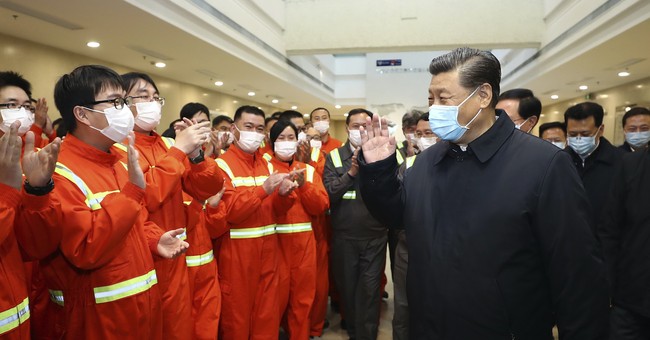 (Editor’s Note: The views expressed in this column are those of the author and do not necessarily reflect those of RedState.)

The ChiComs have been following a carefully orchestrated game plan to exploit their virus for geopolitical gain, as I laid out over a year ago here:

Delay release of clinical data while knowingly allowing infected Chinese to spread the virus to the unsuspecting world for months before grudgingly notifying the WHO of the virus and then dribbling out incomplete clinical data. As reported here, over 750,000 Chinese entered the US during the virus outbreak before President Trump implemented the travel ban on 31 January [2020]. The CCP goal is to destroy the American economy and the economic leverage that President Trump has exerted on China with the trade war and decoupling policies.

Withhold virus clinical data in order to mislead foreign experts about the seriousness of the virus.

Kick out Western media in order to control information about Chinese infection and death statistics.

Under-report Chinese virus statistics while claiming that China has the virus “under control” through “superior Chinese methods.”

Exploit the vast Chinese propaganda apparatus worldwide to convey messages demanding international cooperation and coordination, following Chinese leadership, attacking the US for demanding Chinese accountability, and conveying other CCP-approved baloney. This includes the CCP’s proposal for a “new health silk road” led by China, of course.

Regarding points #4, #5, and #6, while the rest of the world has been experiencing ChiCom virus outbreaks and “variants,” Communist China has claimed to have “beaten” the virus early on, and their state-run media have been propagating various pro-China narratives over the past couple of months that are misleading and false:

Trusty China vaccines can help Europe [never mind the adverse side effects]
China’s vaccines are a “global good” [despite their relative ineffectiveness and the recent approval of the Pfizer vaccine for distribution in China!]
Pumping ChiCom vaccine diplomacy via their “Health Silk Road” [which is failing miserably in Latin America and elsewhere]
Accusing the US of a “moral failure” in the distribution of vaccines to “rich and poor countries” [funny how only the US has developed effective vaccines]
Accusing the US of “vaccine nationalism” while distributing Sinovac vaccines that don’t work
Etc.

Regarding point #4, the ChiComs have been lying from the very beginning. Below are the latest virus-related statistics for Communist China from Worldometers:

The China death totals have remained static for over a year, never even topping 5,000 deaths in a country of 1.4 billion people. Did “traditional Chinese medicine” come to their rescue? Not unless they slipped some hydroxychloroquine and ivermectin into the mix. My bet is on bald-faced lying – a Chinese communist specialty.

No one – and I do mean NO ONE! – believes that the country in which the virus first appeared has sustained only 4,636 total deaths – virtually unchanged from a year ago as I reported last May here:

China first disclosed the virus to the China-friendly World Health Organization on December 31st [2019]. The virus was spreading unchecked in Hubei province for over two months before any quarantine measures were implemented. Yet somehow in a country of 1.4 billion people and in a culture in which communal meals are taken, and where close quarters contacts are the rule not the exception, only 82,800 people were infected as of May 4th [2020]. Of the 4,600 total Chinese deaths to date, well over half of those deaths were reported by the Chicom government to be in a single city – Wuhan. But Wuhan wasn’t quarantined until January 23rd, and an estimated 5 million people left Wuhan on Chinese New Year travel before the city was locked down. Given what we know about the highly contagious nature of the virus, are we to believe that the spreading of the virus by some of those New Years’ travelers from Wuhan only resulted in under 2,000 deaths in the rest of the country?

The virus is raging through India right now:

And we are supposed to believe that in neighboring China less than 100 Chinese have died from the virus over the last 12 months due to China’s “superior methods“? Sheer propaganda and misreporting. There are lies, damn lies, and statistics, as Samuel Clemens (Mark Twain) once said.

Even China-friendly Bloomberg News speculated on ChiCom misreporting back in December:

[W]ith Wuhan home to about 11 million people, as many as 500,000 residents might have been infected, nearly 10 times more than the 50,000 confirmed COVID-19 cases reported by health authorities in mid-April, when the survey was conducted.

China has been criticized internationally for its initial handling of the outbreak, which has spread around the world in a global pandemic in the year since the first cases emerged.

The US has raised questions about China’s accounting of the virus fallout in Wuhan, which was quickly eclipsed by larger outbreaks in Europe and North America. A number of revisions of the case and deaths data added to suspicions China was massaging the numbers.

“Massaging the numbers.” Ya think? Sinovac vaccines are 50-60% effective, but hey, the ChiComs licked the virus because there hasn’t been an appreciable increase in Chinese deaths due to the virus in over a year. So their state-run media continue to bleat, anyway.

Will we ever know how many Chinese have died from the virus? The sleuths at SinoInsider may have gotten close to the number in a breathtaking new analysis entitled, “China’s Census Data Hints at Scale of COVID Coverup,” that examines new Chinese census data and other statistics, including the abnormality of the 2020 population growth and death figures compared with the numbers over the past decade, sudden plunges in cell phone users in China in early 2020, and an over 4.5 million decrease in hukou registrations (i.e., domestic family passports) in Hubei province – the center of the virus breakout – in 2020. SinoInsider’s conclusions (emphasis added):

[W]e have reason to believe that actual COVID deaths in China far exceed the official figure of 4,636; deaths caused by or related to complications of COVID-19 in 2020 could potentially be in the eight-digit range. Also, given our pandemic death estimate and in accounting for CCP’s data manipulation, we believe that China’s population currently stands at less than 1.4 billion.

That would mean over 10,000,000 Chinese deaths due to the virus! Be sure to read the entire SinoInsider report, which discusses longstanding ChiCom manipulation of population numbers for political and geopolitical purposes.

Finally, as a chaser, there is item #7: blame foreigners for new outbreaks. This drum has been banged continuously since last summer (more here and here). But it appears that the ChiComs’s “superior methods” may not have licked the virus in China after all, given new cases reported in northeast China, but that old “it came from a port city and thus from foreigners” card is still being played (emphasis added below):

Yingkou, Northeast China’s Liaoning Province is in the spotlight as epidemiologists believe that the recent resurgence of sporadic COVID-19 cases may have originated from the port city, which has imposed strict traffic control and anti-epidemic measures to prevent COVID-19 from spreading.

The latest outbreaks were in two provinces – Liaoning and East China’s Anhui – that had reported 16 confirmed and 13 asymptomatic carriers as of press time.

Epidemiological studies showed the travel histories of the confirmed cases and their close contacts were linked to at least six provinces and cities, including Beijing.

Blame-shifting, bogus statistics, withholding clinical data from the world, profiting off the pandemic, general-purpose lying, and lies and agitprop via state-run media. Par for the course for Communist China under the leadership of the new Great Helmsman.

How do you know if a ChiCom is lying? Whenever he opens his mouth to speak.