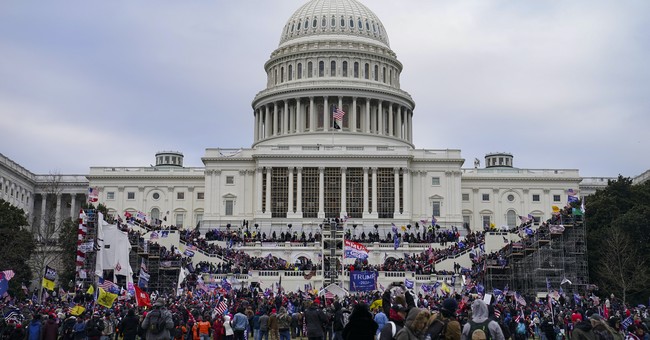 There are a few basic principles to which people should probably adhere.

Never compare anything to the Holocaust or to 9/11. Because nothing is going to come close, so don’t try.

But that doesn’t stop people from doing it.

George Will has been around in politics for what seems like 100 years, but apparently, he hasn’t learned that basic principle.

Will was on ABC This Week with George Stephanopoulos. Stephanopoulos quoted Sen. Susan Collins (R-ME) who said that she’s optimistic that they might pass a Jan. 6 commission in the Senate. “It’s kind of hard to believe it’s even controversial,” Stephanopoulos said.

“Well, it’s controversial for one reason,” Will said. “We have something new in American history; that is a political party defined by the terror it feels for its own voters. That’s the Republican Party right now. Every elected official is frightened of his voters, therefore doesn’t respect his voters, doesn’t like his voters, and is afraid that a vote for this will be seen as an insult to the 45th president.

I would like to see January 6th as burned into the American mind as firmly as 9/11, because it was that scale of — of shock to the system. And I think there will be a commission, but it is controversial for that reason.”

Having a commission is controversial because there are already a ton of investigations. It’s probably already one of the most “investigated” riots ever, with a lot more to come. But a commission, controlled by House Speaker Nancy Pelosi (D-Ca), is guaranteed to be a political smear job aimed at constantly targeting Republicans. Any Republican who doesn’t see that isn’t looking at the history of the last four years clearly and has no idea what’s going on. Enter George Will.

No, George, the party isn’t “defined by the terror it feels for its own voters.” It could just be that the party has passed your establishment self by; you have no idea what it’s about anymore. The voters actually realize what such a commission would be while you clearly don’t.

But then Will really goes over the slide, comparing the riot on Jan. 6 to 9/11. Seriously? 3000 people were killed in terrorist attacks against our country. It isn’t even close to that and anyone thinking it is, isn’t living in reality. By the way, has Will missed the months of violent riots against the government from radical BLM/Antifa leftists? And exactly when has Will been relevant to any current Republican thought? But, of course, that’s why he’s invited on ABC — because he isn’t.