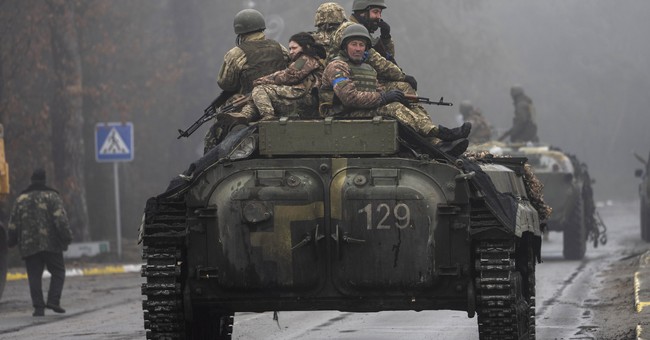 The Russian invasion of Ukraine has continued to bog down over the last several months. Vladimir Putin’s forces have consolidated in the east, having abandoned any plan to conquer the Eastern European country. RedState recently published a lengthy explainer of where things stand that is mandatory information to understand the situation on the ground.

The long and short of it is that Ukraine doesn’t appear to have the capacity to expel the Russians from the eastern areas of the country. Meanwhile, Russia may be in a worse spot, stretched thin, dealing with multiple crises within its sphere of influence, and having been reduced to nominal attacks meant more to push its propaganda than to accomplish anything militarily. “Stalemate” would be a fair word to use, and that could last a lot longer unless Putin finally decides the costs are no longer worth the effort.

In the midst of that, the fecklessness of the West has become apparent. The EU is already undermining sanctions, keeping money flowing to the Russians because they stupidly attached themselves to Putin over the last two decades in the name of fighting “climate change.” Back in the United States, rumblings from the White House of losing faith in Ukrainian President Volydymr Zelensky have also started.

Now, CBS News is throwing Ukraine under the bus.

The first reaction to that report from a lot of people on the right is going to be to fist-pump about how corrupt Ukraine is. That’s probably fair given that just a few weeks ago, any questioning of the goings on in Zelensky’s country going resulted in being labeled a “Putin stooge.” Rep. Lauren Boebert made that point in response.

Two things can be true at the same time. I don’t care how corrupt you think Ukraine is, Russia was not justified in invading (and is certainly even more corrupt itself). Corruption in Ukraine is a problem for Ukraine to fix, not an outside nation that was in no way under threat, and if anyone is still buying the “NATO aggression” garbage, I’d suggest they not be so gullible.

Still, Boebert’s critique of Ukrainian aid is a separate question, isn’t it? A cause can be worthy of support while the support being offered is mishandled and misappropriated, and I think that’s where the CBS News report misses the point, and purposely so.

The real story here is not that an oligarchic nation with a myriad of issues in the middle of war might not have total control of weaponry being mass imported in a chaotic fashion. The real story is that the Biden administration and the US Congress are sending all those weapons with no system of accountability in place. CBS News wants you to focus on the endpoint without even bothering to critique the starting point.

Sen. Rand Paul tried to insert protections into the $40 billion Ukraine aid bill that would ensure taxpayers were given an account of how the money is spent and where the weapons end up. He was attacked for doing so and the spending bill passed anyway. We are now seeing the results of that, and that’s on Joe Biden. That’s also on Nancy Pelosi, Chuck Schumer, and yes, Republicans in Congress who refused to hold the line for some basic accountability. None of those people should escape responsibility by making this about Ukraine’s corruption, and the media should not get away with trying to obfuscate blame.