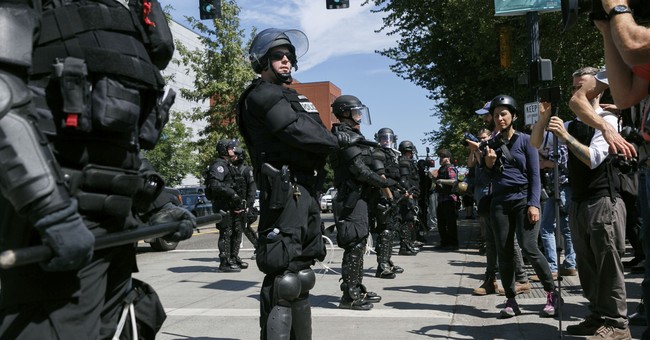 Question: How many times have we been warned by Joe Biden and left-wing media sock puppets about the threat of “white supremacist” terrorism and “right-wing hate groups”? Hell, round it off at the nearest 100. For example, in May, when a man shot three Korean women in a Dallas, Texas, hair salon, which Biden quickly and falsely attributed to “white supremacy.” Answer: I lost track a long time ago.

Even worse, as I reported in July, Biden’s new cybersecurity deputy inexplicably named “systemic racism” as the greatest threat to America. Finally, cast your mind back to February when the BLM activist and gun-grabber advocate attempted to assassinate a Louisville, Kentucky, mayoral candidate. The list goes on.

Yet the Biden administration, in 2021, unveiled a new national strategy for countering domestic terrorism, as reported by Yahoo News, warning that white supremacy and “militia violent extremists” currently present the “most persistent and lethal threats” to the United States homeland.

In a speech following the announcement, woefully inept Attorney General Merrick Garland blathered on about a “whole of society approach,” again keying white supremacists as the top domestic violence threat.

In the FBI’s view, the top domestic violence extremist threat comes from racially or ethnically motivated violent extremists, specifically those who advocated for the superiority of the White race.

There’s just one problem with the Democrats’ “white supremacy” narrative: The facts beg to differ.

So does the FBI, if even reluctantly so. As reported by The Daily Wire, leftists dominate the FBI’s Top 10 Most Wanted Domestic Terrorism list. While several are associated with a leftist group that bombed the U.S. Capitol in 1983, the list also includes at least two communists, three black nationalists, one anti-war activist, and a vegan eco-terrorist.

Here are several “highlights” from the list, as noted by Daily Wire:

Josephine Sunshine Overaker: An eco-terrorist linked to the Earth Liberation Front or Animal Liberation Front. She was charged in Oregon with involvement in seventeen acts of terrorism, including arson and destruction of an energy facility.

Ishmail Muslim Ali: A black nationalist serving time for eight murders when he hijacked a plane transferring him to a New York jail and directed it to Cuba, where he became a public school teacher.

George Edward Wright: A black man who was convicted of murder, escaped from prison, and hijacked a plane. He pretended to be a reverend and hid a gun inside of his Bible.

Catherine Marie Kerkow: A white woman from Oregon who belonged to the Black Panthers and hijacked a plane alongside her black nationalist boyfriend, demanding $500,000 and the release of Angela Davis, a Communist black militant accused of murder.

Jose Espinosa Cabellero: A Hispanic man who hijacked a plane flying from New York to Florida, and demanded to be flown to Cuba.

Ambrose Henry Montfort: A black man who hijacked a plane and demanded to be flown to Cuba.

Yet, in February 2021, noted Daily Wire, days after Biden took office, a Department of Homeland Security-linked “fusion center,” a liaison office for the receipt, analysis, gathering, and sharing of intelligence, issued a report saying that there was a “rarity of targeted left-wing extremist attacks,” and that right-wing domestic violent extremists, chiefly “anti-authority extremists” and “militia extremists,” “were responsible for the majority of deadly domestic terrorist activity.”

My objective was not to offer empirical evidence of anything. I have also drawn zero conclusions — other than this one:

Biden and the Democrat Party, supported by the sock puppets of the left-wing media, spew the same crock of crap on a regular basis about “white supremacist” this and “domestic terrorism” that, all the while ignoring the abundance of left-wing terrorism, along with other facts and data that flies in the face of their narrative.

And that narrative, by the way, is racist as hell.