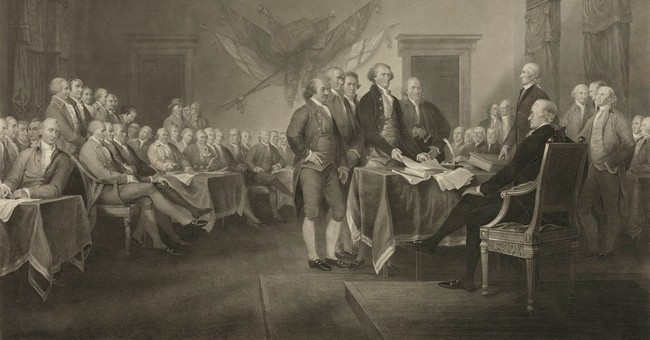 Among the executive orders “progressive” Joe Biden couldn’t wait to sign after assuming occupancy of the Oval Office was the deep-sixing of Donald Trump’s 1776 Commission.

But, hey — how could we blame him?

What “good” Democrat worth his or her weight in the loathing of America could let stand a commission created to ensure America’s children are provided the opportunity to learn the unadulterated history of the founding of America, and the fight for independence in the greatest country in the history of mankind?

A commission commissioned by Donald Trump, no less?

So, yet again, America, Joseph Robinette Biden Jr. has once again saved us from ourselves. I mean, one look at the declared purpose of the 1776 undertaking by commissioners tells you all you need to know about these very dangerous people:

“The declared purpose of the President’s Advisory 1776 Commission is to ‘enable a rising generation to understand the history and principles of the founding of the United States in 1776 and to strive to form a more perfect Union.

“This requires a restoration of American education, which can only be grounded on a history of those principles that is ‘accurate, honest, unifying, inspiring, and ennobling.

“And a rediscovery of our shared identity rooted in our founding principles is the path to a renewed American unity and a confident American future.”

Again, thank God we have Joe to protect us from such nefarious propaganda.

Try as Joe might have to erase Trump’s 1776 Commission from having ever been created, it appears he and (pick one, or more) his fellow “progressives,” the radical left, Black Lives Matter, America-haters “might” end up sorely disappointed.

As reported by The Washington Examiner on Friday, the education advisory commission will resume operations, despite being disbanded by Biden — with the added objective of undermining the insanity of critical race theory now metastasizing in schools across America.

The 1776 Commission is scheduled to convene on Monday in Washington on the annex campus of Hillsdale College to plot its next steps. An agenda for the private meeting, which is closed to the media, was not available.

But in an interview with the Washington Examiner, Matthew Spalding, the 1776 Commission’s executive director, said the group sees a major role for itself in the explosive debate over the teaching of the history of the United States in public and private schools.

The battle lines are clearly drawn.

On one side, “traditionalists,” as described by the Examiner, who believe in de-emphasizing race and ethnicity. Spalding told the Examiner the commission doesn’t intend to “whitewash” America’s history slavery and racism, but wants to promote a curriculum that defines “racial equality” as an American “tenet”: — “the founding creed of the Declaration of Independence: all men are created equal” — and Martin Luther King Jr.’s dream of a colorblind nation.

On the other side, critical race theory — the “decades-old academic study of U.S. history, more prevalent recently,” argues that racism remains deeply embedded in all aspects of American life. According to CRT, the only way to “unravel this systemic racism and bring about a just society” is for institutions, public and private, to place race and ethnicity at the center of policymaking, hiring, and how people are treated generally.

Spalding, who runs Hillsdale’s Washington campus and is a faculty member, told the Examiner the notion of dividing people into groups should make all Americans “very nervous.”

When we start going about dividing people by groups, by social identities, and especially by identities that deal with race, and we’re starting to make those kinds of divisions, all Americans should get very nervous.

“It’s a departure away from the historic grounding of civil rights in America, which is that we all are equal.”

Spalding then pointed to the obvious, unintentionally — meaning he precisely described the objective as an intended part of his comment.

“Current arguments about identity politics and critical race theory that … present themselves as merely responding to perceptions of their current assessment of American society, but do so by introducing as their principle that we should look at people based on the color of their skin, strikes us as a fundamental denial of the idea that all men are created equal.

CRT “teaches” — indoctrinates — that all “men” are not created equal. On the contrary, CRT contends that “white people” are born “racist,” and there is nothing “white people” can do about it, other than spend the entirety of their lives atoning for their “whiteness” and apologizing to “black people” for being “racist.”

I have thought often about Martin Luther King Jr. and his “I Have a Dream” speech, along the way, as the insidious cancer of Black Lives Matter Marxist dogma, critical race theory, and the Democrats eagerly presenting themselves as the useful idiots of the radical left have tightened their collective grip on this country.

“I have a dream that my four little children will one day live in a nation where they will not be judged by the color of their skin but by the content of their character.”

~ Martin Luther King Jr. August 28, 1963 — in front of the Lincoln Memorial during the massive, civil rights “March on Washington.

As Michael illustrated, “Wrong,” according to “Woke” — the aforementioned components of the “insidious cancer” I referenced.

CRT was specifically designed to make EVERYTHING about “color of skin” and ZERO about “content of character.”

Young white kids across America are being programmed to hate their whiteness, to feel guilty for being born white. To atone to people of color for the rest of their lives for BEING white.

Young kids of color are being programmed to believe they were victims of white America before they were born, that they will never get a fair shake in education, and that they are right to fear the police. They are being programmed to believe that they will NEVER have a chance at EQUITY (an insane Marxist code word now being used by the left — including the Democrat Party — in place of “equality”). It is insane.

The radical left — again, with the Democrat Party as useful idiots — is determined to rewrite American history, change the current psyche of this country, and redraw America’s future based solely on skin color; content of character, be damned.

MLK would weep. I do not say that hyperbolically. He would WEEP at what the left and its stooges in the Democrat Party have done to his cause and race relations in America. And more ominously, what they intend to do moving forward.

The promise of a renewed 1776 Commission, and perhaps other efforts like it, can be one part of the effort to fight back, gang.