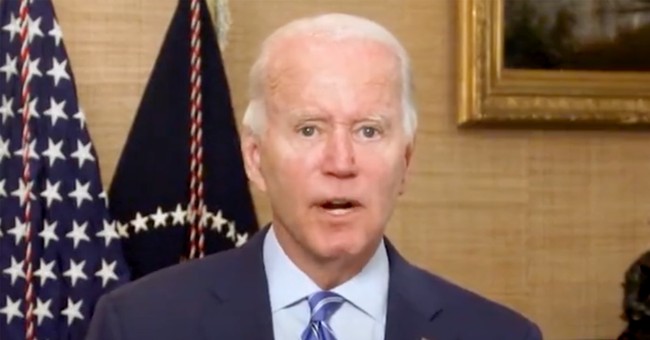 Joe Biden is on his sixth day of a so-called “rebound” infection of COVID-19, and he continues to test positive. The White House released the news on Thursday, though details of his actual condition are scarce. Biden’s doctor has been put on lockdown and has not been allowed to address the press.

The president originally tested positive for COVID-19 on July 21st. After testing negative about a week later, he then decided to rush out to do a public appearance where he bragged about his supposed physical resiliency compared to former President Donald Trump. That was premature, to say the least. With his rebound infection (which means he was never truly negative), Biden is now on his 15th day of dealing with the virus.

As Tucker Carlson noted, so much for that “pandemic of the unvaccinated” line, right?

Biden is quadruple-vaxxed and double-masked. He also took a round of Pfizer’s proclaimed “wonder drug,” Paxlovid, after becoming infected. Yet, he’s still COVID-19 positive after initially testing positive over two weeks ago. If that’s not a rebuke of the White House’s messaging on the coronavirus, nothing is. All of the lies about how the vaccinated don’t get COVID have been completely exposed, something Carlson roasts in his monologue.

It was never a “pandemic of the unvaccinated,” something I pointed out in December of 2021. Yet, Biden continued to dangerously assert that the unvaccinated were somehow responsible for all the nation’s woes. It was one of the most disturbing, divisive attacks I’ve ever seen from a president, and it’s beyond ironic that Biden himself has now apparently turned into one big ball of COVID.

Then there was the president’s remote appearance on Thursday, where he got confused while speaking to a group of business leaders.

Apparently, the President of the United States is unaware of what office he actually holds. Perhaps we can make that another symptom of “long COVID?” After all, everything else already is. Of course, this isn’t the first time Biden has been confused about who he is. Still, the press will argue such confusion is totally normal. It’s just a stutter, you see!

It’s not totally normal, though.

In the end, I sincerely hope Biden fully recovers. It’s just not in me to wish harm on my political enemies, no matter how much I disagree with them or how harmful I think they are. But no one should be deluded into thinking Biden having COVID-19 for over 15 days (I’m assuming he’ll be positive again tomorrow given how he looked on that video) is not a big deal. This is a very big deal, and it testifies to how frail the president is. The idea of him running for re-election is just laughable.