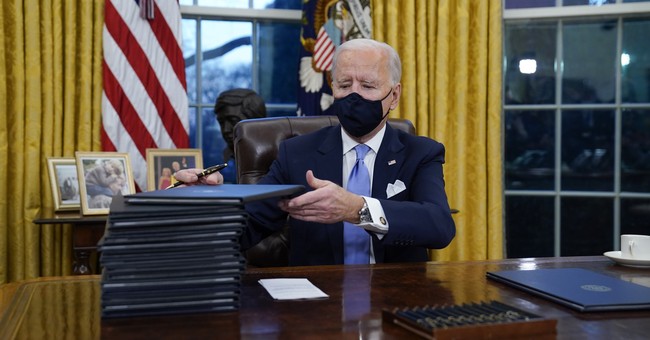 While entitled to do so, Biden is eradicating programs merely for their having Trump’s signature at the bottom.

There had been a proposed installation for Washington, D.C., meant to honor historical national icons. Proposed by President Trump last summer, the National Garden of American Heroes was going to honor a number of prominent individuals from our past involving a number of categories, both historical and cultural. That plan has since been scrapped by President Biden, in a move that follows in a line of other items from Trump’s tenure that have become rescinded arbitrarily by Biden.

The garden, while not the most impactful, is the most symbolic example — as there was little to be seen to make this objectionable in the eyes of the current administration. Some of the names to be included in the initial installation were going to be Harriet Tubman, Whitney Houston, and Kobe Bryant. So, to suggest there was any cause to strike down this plan over bias or other claims has little merit. Biden has shown a tendency to remove almost any one of Trump’s orders and directives — literally from Day 1.

After his inauguration, Joe Biden went to the White House and signed over one dozen executive orders, most of which overturned Trump’s orders. While most of these involved rules about border security — of Biden’s voluminous EOs in his first days over one-quarter of those were immigration-related — the president has been intent on erasing any of Trump’s own orders, many of which appear innocuous or lacking in controversy. In the first week, the order in the administration was to put a freeze on all of the EOs placed by Trump, so they could be independently reviewed.

On the same day he spiked the Garden Of Heroes, Biden also overruled the Trump EO on protecting our national monuments, which we saw being vandalized or toppled entirely. Why Biden sought to remove this particular protection is a curiosity. He also halted the move to have the Department Of Justice reviewing the Section 230 protection on social media companies. Another strike down that appears to be purely based on the Trump name was to end the plan to have one national seal applied to the documents used with overseas relief aid and other outreach performed by the US. Why?

To say the appearance of pettiness is visible is a fair read on the matter.

What has become a telling result in many of these reversals is how they have led to negative results for Biden. His zeal to roll back so many of Trump’s border initiatives has led to not just an increase in border traffic, but has invited the largest surge seen in decades. The debacle of underage children being housed by the government has made all prior complaints of Trump’s similar issue look quaint by comparison.

One other early order from Biden was to bring an abrupt halt to the Keystone pipeline construction, initiated under Trump, for no explainable reason. That led to a backlash over thousands of jobs becoming erased and has kicked off the rise in gas prices nationwide. This has since become compounded by Biden’s most recent pipeline decision.

Days ago, the president announced he is eliminating the sanctions which had been placed on the Nord Stream 2 pipeline in Europe. This has been a decision that had bipartisan opposition in Congress, but has now permitted the construction of the conduit in the Baltic Sea from Russia to be completed, seen as a tremendous windfall for Russia. The amount of head-scratching ironies this creates is amazing, just starting with the fact that this means Biden appears to say fuel pipelines that benefit the US are a bad idea — but he is all in favor of one of our combative nations to be permitted to reap the benefits of the same thing.

More amazing: consider all of the claims we had been treated to on how Donald Trump was in the back pocket of Vladimir Putin, and beholden to Russian oligarchs. Trump had been the one to institute the restrictions on the companies involved, which halted the construction. Biden, in removing these sanctions, has benefitted the Russian oligarchs behind the project, and the German oil company owned by a former East German Stasi agent who is a close ally of the biggest winner of all in this move — Putin.

It has become more evident that for the Biden administration what is more important for them is not what is good for the country; it is that eliminating Trump’s name from any policy is what is in the best interests of the nation.