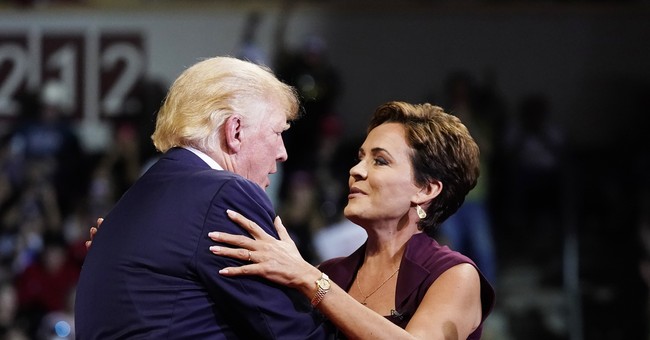 So the legacy media is back on its Trump endorsement watch, this week in Arizona and Michigan. These states are critical bellwethers not only in 2022, but 2024, particularly since both of these states were narrowly lost by Trump in 2020. Some of the candidates have distinguished themselves as fighters worthy of the MAGA mantle.

Most of the legacy media outlets are pointing to her MAGA creds and her background in conservative media, while tacitly ignoring her decades worth of business experience, which gives her real gravitas in relating to Michiganders as well as discussing the issues they are fighting against.

CNBC showed restraint, but you can tell they are beside themselves:

Dixon will face off in the general against incumbent Gov. Gretchen Whitmer, who ran unopposed in the Democratic primary.

In the tumultuous Republican gubernatorial primary, meanwhile, Dixon emerged as a frontrunner only after multiple leading candidates were disqualified from the ballot and another was arrested on misdemeanor charges related to the Jan. 6 Capitol riot.

Dixon could be facing an uphill battle against Whitmer, whose bid for a second term in office is buoyed by a well-funded campaign and strong approval ratings.

I would like to know CNBC’s definition of “strong.”

But what Dixon has on her side is authenticity, as opposed to the affected, Invasion of the Body Snatchers demeanor of Whitmer.

Here’s what we probably can expect: Whitmer and her cohorts will try to tie Dixon to Trump and paint her as an insurrectionist and a right-wing crazy. Same playbook as every other Democrat strategist, rinse, repeat.

News 9&10 thinks Dixon’s strategy will be to tie Whitmer to Biden and the bad economy. While that may play, I think Dixon would be wise to remind the people of Michigan how horrible Whitmer was during the pandemic. That protest of barbers on the steps of the Lansing Capitol juxtaposed with the perfectly coiffed Whitmer issuing her diktats on Zoom, with her Fauci pillow in full view, would be enough to get my blood boiling. Like many of her Democrat governor counterparts, Whitmer used executive privilege to lord it over the people of Michigan, shut down their businesses, lock them in their homes, while killing vulnerable elderly. Whitmer must be required to answer for this, and Dixon appears to be the person who can hold her accountable.

“Families won tonight. Families came out and voted, and families want a family-friendly Michigan and we’re going to deliver it; and we’re going to hold her accountable to her terrible record here in the state of Michigan. We’re not going to let the people forget, and trust me, as I’ve gone around the state they haven’t forgotten.”

And there is the Arizona primary gubernatorial race with former news anchor Kari Lake, and lawyer and land use consultant Karrin Taylor Robson, which is considered too close to call. Lake is confident she has won this one.

Should that be the case, Lake is not only media savvy, she’s savage, as reflected by how she handled a CNN reporter who wanted an interview.

Lake also knows how to work a room. Lake gave a press conference on Wednesday where she held court with local and national media outlets.

And her secret weapon: Lake has the wind of the Mama Bears beneath her sails. Democrat candidate and former Arizona Secretary of State Katie Hobbs is still tainted by the 2020 election, and its fallout.

When Kari Lake’s primary win is secured, expect a knock down, drag out battle.

Then there are the other races that received Trump’s endorsement and won Bigly: Blake Masters the Republican candidate for U.S. Senate will go up against incumbent Sen. Mark Kelly (D-AZ). And AZ State Rep. Mark Finchem won the Republican nomination for Secretary of State.

Mark Finchem, a state representative and election conspiracy theorist who was endorsed by former President Donald Trump, has won the GOP nomination to oversee voting as Arizona’s secretary of state, according to a race call by The Associated Press.

Finchem will appear on the November general election ballot against either Democrat Adrian Fontes, the former county clerk of Maricopa County, Arizona’s most populous county, or Democratic state Rep. Reginald Bolding. The AP has not yet called that race.

Finchem was seen as the Republican frontrunner after securing Trump’s endorsement last September. He won the former president over by becoming one of the loudest proponents over the past two years of the lie that Trump won the 2020 election.

Tell us how you really feel, NPR.

The Washington Times was better, but still deserves a side eye:

State Rep. Mark Finchem, meanwhile, was declared the winner in the GOP race for secretary of state. Mr. Finchem spent more than a year claiming the 2020 election was rife with voter fraud, and received Mr. Trump’s endorsement early in the race.

Since Finchem won, it could well be considered time well spent.

Probably the most satisfying victory for Trump is John Gibbs, candidate for Michigan District 3. The former HUD assistant secretary, OPM director, and missionary successfully defeated incumbent Rep. Peter Meijer, who was one of the 10 Republicans who voted to impeach then-President Donald J. Trump over the Joke-6 fauxsurrection.

Democrats even poured money into Gibbs’ campaign, because they felt he would be easy pickings against Democrat Hillary Scholten come November.

Be careful what you ask for, Dems.