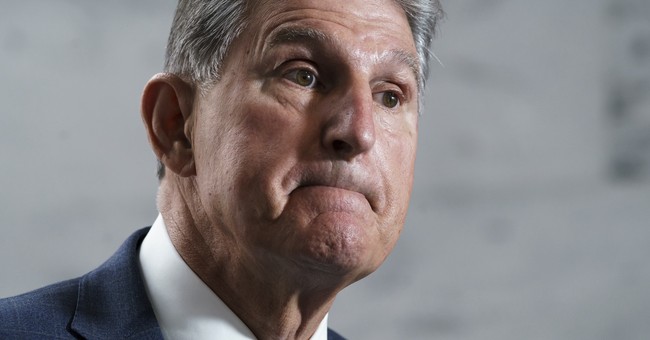 West Virginia Democratic Senator Joe Manchin sent shockwaves throughout Washington, D.C., when he announced that he had come to an agreement with Senate Majority Leader Chuck Schumer on the green-energy, tax-raising bill laughably titled the “Inflation Reduction Act.” Who exactly is he aiming to please with this about-face?

Manchin… received approximately $6.1 million from individual donors who gave more than $200 in aggregate to his campaign between January 2021 and June 30, 2022, according to Federal Elections Commission (FEC) filings.

Six point one million dollars. Sounds like he has a lot of support. But where exactly are these donations coming from?

Interesting. The “Inflation Reduction Act,” a streamlined, less-expensive version of the failed “Build Back Better” plan, contains all sorts of green-energy handouts and tax hikes, the sort Manchin has in the past said he wouldn’t pass in times of high inflation.

I wrote a column supporting Manchin in April, saying that even if he wasn’t perfect, he was an essential force in stopping the bloated BBB bill and refusing to end the filibuster. He and Democrat Arizona Senator Kyrsten Sinema have been key roadblocks to the insanity that would ensue should Schumer be able to pass whatever legislation he wants, which he presumably could do without the filibuster.

Still, it’s hard not to come away with the impression that Manchin has turned his back on his stated values of curbing inflation and not raising taxes in a time of economic turmoil. My colleague Bonchie also points out how he basically stabbed Senate Minority Leader Mitch McConnell and all Republicans in the back by announcing his deal with Schumer only after a microchip deal had passed. McConnell, unfortunately, believed Manchin when he said that a massive reconciliation bill was not on the table anymore:

Manchin had previously signaled that he would not sign onto a massive spending bill until inflation was under control. Unfortunately, he broke his promise, and now the combination of more spending and taxes being passed onto consumers will likely lead to even higher prices…

To put it frankly, Sen. Mitch McConnell got absolutely played.

Manchin, who has not announced whether he will run again when his seat is up in 2024, can expect to get a strong GOP challenger if he does. Slippery moves like this won’t go over well with his voters, even if a majority of his donations come from out of state. Per Fox:

Shelley Moore Capito, R-W.Va., told Politico that Manchin would have trouble convincing his voters that the bill is good for West Virginia.

“It’s not good for the state, and I think it’s difficult to sell in the state,” Capito said.

The bottom line for Manchin: out-of-staters don’t get to vote in a West Virginia election. That could be bad news for the mercurial Senator, and the “Inflation Reduction Act” could very well be his swan song.