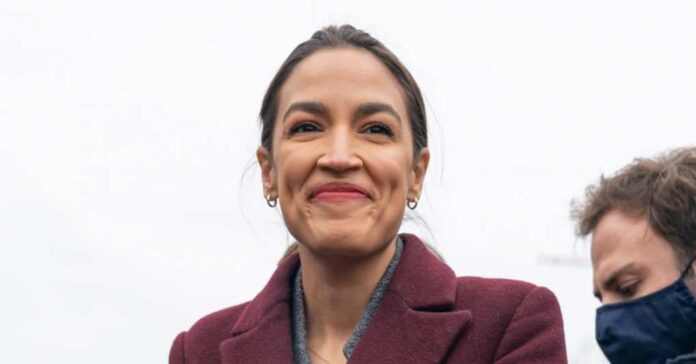 We already know that Joe Biden would be a sorry excuse for a candidate for the 2024 presidential election. It doesn’t matter whether he has another term in him or not. After all, he shouldn’t have even been given the first term.

It’s safe to say that most Americans would agree that we don’t need an octogenarian in the Oval Office.

There have been a number of Democratic candidates thrown out as possibilities. However, most fail to impress in any way. Sure, the natural option would be Kamala Harris since she’s currently the VP, but her approval rating is even lower than that of Biden’s.

And, of course, you have the governors who’d love to get in on the action – Governor Newsom from California and Gretchen Whitmer of Michigan are certainly at the top of the list.

But we can’t forget to consider Alexandria Ocasio-Cortez. AOC may seem like a wild card, but she has an intense following of progressives who would love to see someone younger in the White House.

And AOC hasn’t eliminated any possibilities. She’s been asked to comment on her future on more than one occasion. She has said that she doesn’t plan to be a Representative forever. Well, that means that there are only a few possibilities left – senator, cabinet member, VP, or President. She wouldn’t be the first one to try to jump past all of the other positions and go right for head honcho…

As The Hill reported, “An Ocasio-Cortez campaign would electrify her fans and detractors alike.”

It would make for an interesting election, and there’s no telling what would come out of her mouth during some of the primetime debates. After all, we’re talking about the same woman who said that we should get rid of cows because their farts are hurting the environment – only to be seen eating a burger a few days later.

Dana Bash of CNN asked AOC about endorsing Biden for a second term last month. Rather than throwing her support behind the Democratic president, she answered with a vague, “We’ll cross that bridge when we get to it.”

What is THAT supposed to mean? It sure sounds like she knows something that we don’t. You know, like there’s no way that Biden is going to be running for a second term, and she’s not going to support him because she wants his position?

A number of pollsters have already been testing her name along with some of the other Democrats who could potentially run. She’s closer than many would have thought, polling just as well as seasoned candidates like Elizabeth Warren, Kamala Harris, and Pete Buttigieg

When the Washington Post discussed Democratic nominees for 2024, AOC was ranked 10th in a list that included Joe Biden.

We already know that she’ll have some support. And funding likely wouldn’t even be that much of an issue for her. Democratic Socialists would come out of the woodwork to throw money at her. You know Bernie Sanders would be behind her, standing there like a proud father. And she can probably count on a few checks from George Soros, too.

There’s been concern that AOC is too young. While she will be young, she’ll be eligible. The minimum age to be President of the United States is 35 – and she’ll be celebrating that milestone just a few weeks before the 2024 Election Day.

Progressive strategist Jonathan Tasini said that “I think – someday – she could be president. But right now I don’t see the progressive moment having enough heft to get her across the line.”

That’s likely true, and it’s why she’s not polling as favorably as other Democrats.

One thing is for sure. The GOP needs to find a candidate who could easily win against any Democratic nominee, whether it’s AOC or anyone else.