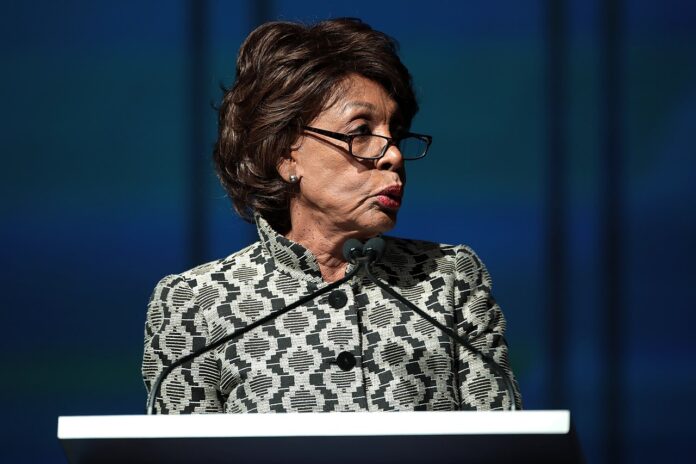 Maxine Waters loves to be in the spotlight but not in the crosshairs. She is the type of person that loves to place others within her line of fire. She sees anyone as her enemy just moments away from having a dart stuck to their forehead. She is quick to accuse and even faster to condemn. But when it comes to her being targeted, she just cannot stand the pressure.

Waters hopped on a plane and traveled to Minneapolis during the trial of Derek Chauvin. It was the week before the verdict was set to be read. She intended to threaten the jurors and judge with bodily harm if they did not convict the cop of murder. She demanded justice without a trial.

She publicly took the stage and verbally incited the people to riot if they did not get what they wanted. They desired to have Chauvin’s head on a platter so Water could parade it around Washington.

One report noted that Waters screamed out to the crowd that “I know this, we’ve got to stay in the streets. We are looking for a guilty verdict. I am very hopeful and I hope that we are going to get a verdict that is guilty, guilty, guilty. And if we don’t, we cannot go away.” They were looking for a guilty verdict and not seeing the man as innocent until proven guilty.

Her words would lead to the death of a National Guardsman. Waters should be put on trial for the attempted murder of the Guardsman. She never felt any shame and would never apologize for the consequences of her big mouth. She was just happy to threaten a cop before he was set to be convicted of murder.

And what is even more shameful is that Water’s taskmaster Nancy Pelosi did not even care enough to tell her to shut her mouth and sit down. She fully supported the shameful comments coming out of the woman’s mouth.

The ethical dilemma that Waters created demands that she face charges for publicly threatening a law enforcement officer. But she will never see the inside of a cell with Pelosi sitting in a position of authority.

Waters did get a spanking from FOX after they came out and reported that she is facing charges of ethical misconduct because she used protection for her trip. And now that she is in the crosshairs, she feels the need to deny everything and the desire to strike back.

One reported noted her rant by stating, “Rep. Maxine Waters, D-Los Angeles, has threatened legal action against Fox News for a story that claimed Waters and other members of Congress were abusing a program created after 9/11 to protect the flying public by assigning air marshals to certain domestic flights.”

The purpose of the protection was to make it to the speech to incite violence without herself becoming a victim. The report showed that “a complaint filed with the House Committee on Ethics alleges that Waters flew from Washington, D.C., to Minneapolis on April 17 to attend the trial of former police officer Derek Chauvin, who was convicted of murdering George Floyd. The complaint says Waters was accompanied by two armed Capitol Police and two U.S. Secret Service agents, but allegedly requested two federal air marshals and two more marshals once the plane touched down to escort her in the airport.”

Waters would, of course, deny, deny, deny. But the paper trail does not lie. Waters claims that she paid public security for her protection. But the reports tell a different story. And being a Democrat, there is not a person around that will believe her story unless she provides the sources of her claims.

The little baby cried that “This leak of my travel information and operational and threat assessment information is deeply disturbing and puts my life at risk.” And yet, she did not even give a thought about the lives of the jurors or judge that she was putting at risk by being in a place she had no business showing up at.