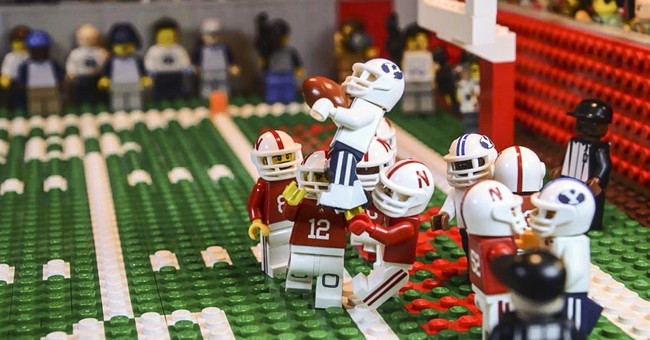 This isn’t your great grandfather’s Lego.

The Danish toymaker will soon release its “Everyone is Awesome” playset.

The rainbow-colored stage and backdrop will feature 11 tiny figures, each a different shade of brilliance.

As described by The Guardian, the characters are “striding purposefully towards an imagined brighter future.”

If you’re unaware, those are the hues of the transgender flag.

Also present: the colors brown and black, in a nod to nonwhite folks.

The figures are neither male nor female, aimed to “express individuality, while remaining ambiguous.”

There’s one exception to the lack of sex distinction.

According to project designer Matthew Ashton, the black effigy — which sports a big beehive — “is a clear nod to all the fabulous drag queens out there.”

The project was initially created by Matthew for his own desk:

“I’d moved offices, so wanted to make the space feel like home with something that reflected me and the LGBTQIA+ community I’m so proud to be a part of.”

Per The Guardian, it “attracted attention and was soon in demand.”

“Other members of Lego’s LGBTQ+ community came by to tell me they loved it. So I thought, ‘Maybe it’s something we should share.'”

He wants children to free their minds:

And he hopes for kids to be their true selves:

“Trying to be someone I wasn’t was exhausting. I wish, as a kid, I had looked at the world and thought: ‘This is going to be okay, there’s a place for me’. I wish I’d seen an inclusive statement that said, ‘Everyone is awesome.'”

The set will go on sale June 1st — the start of Pride month.

“This set means a lot. Often LGBTQ+ people don’t feel seen, especially by corporations. There’s a lot of lip service and not a lot of action. So this feels like a big statement.”

Social and political change are certainly familiar topics for toys these days.

In 2018, I covered Mattel’s eyeing of a Barbie gay wedding playset.

And the year before, the doll celebrated a triumph of love:

More recently, Barbie taught kids about Americans who deal with racism “all the time”:

And of course, in February, Mr. Potato Head removed any indication of whether the tater has tots:

As for Lego, amid condemnation of law enforcement last June, it pulled promotion of its police and fire playsets:

The company’s made previous moves where sexual politics is concerned. It already produced a tiny rainbow flag and sold-separately BrickHeadz brides and grooms — so a gay couple could be fashioned.

Back to Everyone [Being] Awesome, Lego lover Flynn praised the more direct hit on open-society aversion:

For those of you who wonder just how much of a Lego master Flynn is, here’s an idea:

Everyone may not actually be awesome (they’re definitely not), but Flynn’s certainly awesome at Lego.

And now more than ever, Lego’s awesome at being woke.

Lutheran Diocese Announces That the Church Itself Is Trans

‘They,’ Not ‘He’: Google Grows Its Woke Cred With ‘Inclusive’ Upgrades to Predictive Text

School Bus Driver Slaps a 10-Year-Old Girl in the Face for Not Pulling up Her Mask, and It’s All Caught on Camera