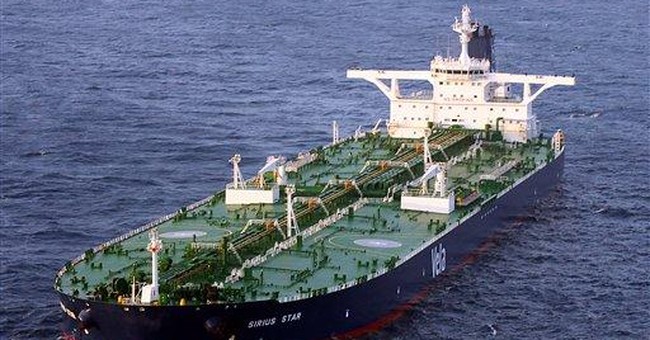 The nation’s Strategic Petroleum Reserve was created in 1975 after the Arab oil embargo caused fear and angry gas-station lines across the country. The underground reservoirs, believed to be the world’s largest, were intended as an emergency oil-savings account for an actual energy crisis threatening national security.

The SPR was not intended for a political crisis when Joe Biden’s Democrats face midterm election annihilation over inflation and outrageous gasoline prices above $6 a gallon caused by the same president’s ideological war on fossil fuels.

Biden’s announced “plan,” which drew considerable criticism, is to draw down a million barrels a day for 180 days from the country’s Strategic Petroleum Reserve stored in vast underground salt caverns in Texas and Louisiana.

Since each barrel contains enough oil to produce 44 gallons of petroleum products, that’s a lot of fossil fuel flowing into the market.

But it turns out, contrary to what you might have thought and hoped with all the Biden administration hype about easing gas prices for his countrymen, the consumers who will directly benefit from using up American reserves are not Americans.

No, Biden’s Energy Department has sold millions of barrels of oil to the same energy companies the president has been loudly denouncing for making excess profits off gasoline sales.

Much of the oil recently sucked from the SPR reservoirs is now sloshing around in giant oil tankers en route from U.S. reservoirs to the higher prices of foreign markets abroad.

It’s a hopeful bank shot by Joe Biden’s less-than-market-savvy administration that more oil on international markets will lower the prices American suppliers must pay for oil on those same markets to haul back and refine for American voters…I mean, for American drivers.

They’re the folks who often find their debit-card purchases maxing out daily withdrawal limits after pumping a single tank of gas.

Joe Biden, of course, being Joe Biden, takes no responsibility for crippling US oil production or causing rampant inflation by trillions in new spending.

He blames the oil price surge totally on Vladimir Putin whose unprovoked February invasion of Ukraine with uncertain outcomes there and in Moscow spooked global energy markets. Barrel prices then spiked from $90 to $120. They’ve since eased somewhat.

Just 532 days ago — Donald Trump’s last hours in office — such price explosions would not have mattered much because under his policies and de-regulations, for the first time in a long while the United States had become energy independent.

In fact, during the Trump years, the United States was producing so much energy domestically that we were exporting vast quantities at good prices.

On his very first day being told where to sit in the Oval Office, Joe Biden began to dismantle that independence. He killed the Keystone XL pipeline with its 40,000 jobs that would have safely delivered 840,000 barrels of Canadian oil from Alberta to Texas refineries every day.

To further his campaign vow to destroy the U.S. fossil fuel industry with its thousands of jobs, Biden also canceled oil drilling leases, increased regulations, banned new sales on tracts both on and offshore, and jacked federal royalties on existing wells.

The predictable outcome of less domestic oil now and in the future was greater purchases abroad at increased prices. When Biden was elected, gas prices nationally averaged $2.11 a gallon. Last month they touched $5.00.

For a time, the United States was still buying 740,000 barrels of Russian oil every day, even after Putin’s troops were shelling Ukraine’s cities and towns.

Political pressures at home forced Biden to cancel them, and he led an allied embargo of Russian oil and gas purchases which Biden said would deny Putin billions in revenue to finance his invasion.

Alas, in another of those unintended consequences that always seem to surprise professional politicians like Biden, the U.S. president’s embargo sent oil prices surging even higher.

The result, as we detailed here, was numerous new customers who don’t care about Ukraine and are willing to pay the higher prices, sending billions in new revenues into Putin’s treasury for as much energy production as he can deliver.

Biden’s energy plan was to smother the U.S. fossil fuel industry and its thousands of jobs and force Americans to go green, to abandon their internal-combustion engines and buy electric ones that start at $55,000.

Those vehicles would be powered by batteries charged by the already over-burdened, coal-fired generating stations run by power companies currently pleading with customers to reduce energy usage on these hot summer afternoons to avoid brown-outs.

This half-baked thinking is reminiscent of Biden’s disastrous Afghan withdrawal plans and his empty design to fight inflation most recently at an 8.6 percent annual rate. But it seems to make sense in the almost-80-year-old brain of Biden and the minds of his committed, left-leaning aides.

Meanwhile, the petroleum reserve is falling, now down to 86 percent of its 714-million-barrel capacity. Trump had taken advantage of lower oil prices during his term to fill the caverns to the top.

Other presidents have authorized releases from the SPR, but none as huge as Biden’s 180-million barrel draw-down set to run right up to – Oh, look! – the November election month.

In 2005, George W. Bush approved a release after Hurricane Katrina. In 2011, Barack Obama okayed the use of 11 million barrels to ease market disruption caused by the war that the Nobel Peace Prize winner helped initiate against Libya’s Moammar Gaddhafi.

Biden energy officials say they plan to refill only one-third of the draw-down late next year when, they predict with the confidence of bureaucrats, oil prices will be much lower.

Next week, as part of his continuing charade to appear to be helping American car owners, the four engines on Biden’s 747 will burn 12.5 hours of fossil fuel to take him to Saudi Arabia, a kingdom he dubbed a “pariah” during his two- and three-hour-long campaign days in 2020.

Biden, who says some things that are true, mentioned that seeking an increase in Saudi oil production to lower prices is not the main focus of his visit. Key word there: “main.” OPEC already snubbed a previous Biden plea. Right, so Joe Biden just wants to see how desert sand compares to the sand at his Delaware beach house.