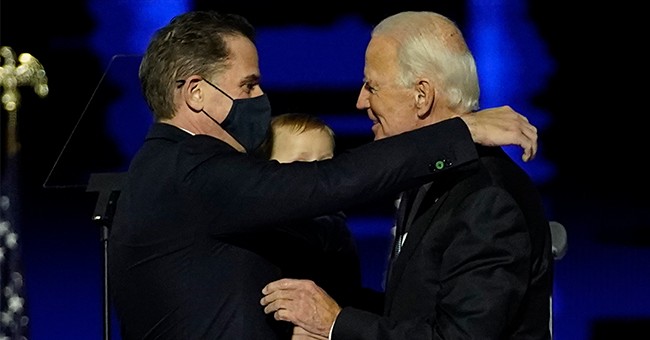 Joe Biden has said repeatedly that he knew nothing about his son Hunter Biden’s business dealings and he claimed his son didn’t make money related to China. We’ve produced a lot of evidence over the last couple of years to show that those were just lies — that Joe had met with several of Hunter’s business associates and that Hunter made millions from his Chinese business associations. Joe even flew Hunter to China on Air Force Two in 2013 to make a deal with a Chinese associate, Jonathan Li, and Hunter introduced his father to Li while they were there. We even saw Tony Bobulinski say that Joe Biden — the “big guy” — was supposed to get a 10 percent from the company that Hunter was creating as a joint venture with the Chinese energy company, CEFC.

Now the New York Post has some more intriguing information from the depths of the Hunter Biden laptop.

Hunter Biden’s hard drive contained an enviable lineup of contacts for top US officials tasked with overseeing the US-China relationship, and at least 10 senior Google executives — raising new questions about the extent to which Joe Biden’s well-connected son could have leveraged his connections for personal profit, The Post has learned.

Many of the top-level government officials would have been in position to help Hunter Biden’s business aspirations in China during his father’s term as vice president from 2008 to 2016. Throughout that period, he infamously looked to capitalize from his family name and connections — often while his father conducted sensitive state business.

As for the Google braintrust, one former exec there told The Post that Hunter Biden sought the tech giant’s cash for Chinese ventures, and that several of the company’s bigwigs wound up working for the Obama-Biden administration during his father’s vice presidency.

Among the U.S. officials listed as contacts were John Kerry, who was Secretary of State; Max Baucus, U.S. Ambassador to China; Thomas Parker, a special advisor to the vice president for national security affairs; Sarah E. Kemp, who served as a commercial counselor at the U.S. Embassy in Beijing; and Patrick Mulloy, former commissioner of the United States-China Economic and Security Review Commission. Most declined to comment or failed to respond. Bruce Quinn, the Director for Implementation at the US Trade Representative office of China, Hong Kong, and Taiwan — was also on the list but he said he had no idea why. He said he used to give seminars and that perhaps Hunter attended one of them.

“Once again, this raises questions about the extent to which Hunter Biden used his father’s name for personal gain. Why does Hunter have these contacts? Did he ever meet or contact these individuals in their official capacity? And if so, how did those contacts benefit Hunter, his father, and Biden Inc.?” Sen Ron Johnson (R-Wisconsin) told The Post.

What was he doing with the Google contacts? As one on the list described it, he was trying to use “daddy’s” name to get investors.

Kenneth Davies was involved with Google’s philanthropic and venture capital arms from 2008 to 2012. He recalled Hunter coming to Google headquarters.

“He was pitching some crazy things like some Chinese stuff. … We kind of looked at it and I kinda scoffed at it,” Davies, 42, told The Post. “He certainly did not know what he was talking about as it relates to energy. It was very much ‘I am Hunter Biden — look at the last name. Rosemont Seneca. We are brokering deals.’ He certainly did not have subject matter expertise about what he was trying to pitch.” [….]

Davies said could not recall the specific ventures Hunter Biden presented at the Spring 2011 meeting. Davies sent a LinkedIn connection request to Hunter Biden in June of that year, the laptop shows.

“My overall impression [was] this guy has clearly just been riding daddy’s coat tails and I have better things to do with my time,” Davies said.

Among the other Google people contacts listed were:

Although Davies expressed skepticism about Hunter’s pitch, the laptop shows there was a video conference between Maris and Rosemont Seneca scheduled for September 29, 2009. Then there were also emails showing that Hunter met with Reicher, after being connected by Fuller. The calendar also shows a call between Hunter and Reicher in April 2010.

“We were making actual real live investments in companies and making some grants to NGOs and others. We were funding research,” Reicher said of his work at Google, though he could not recall ever meeting Hunter Biden.

In a statement Google said they had never invested cash in any Hunter Biden projects.

“These are mostly long-departed employees and we have no record of any such investments,” a Google spokesperson told The Post.

But interestingly, then some of those Google contacts went on to serve at the White House including Davidson, who became director of Digital Economy for the US Commerce Department in June 2015 and Smith who became chief technology officer in September 2014.

Hunter Biden and Smith were chummy during her tenure at Google and while she served as CTO. After she was appointed, Hunter toasted her at a party at the home of DC powerbroker Hilary Rosen. Smith’s then-wife, New York Times columnist Kara Swisher, was there, as was Dr. Anthony Fauci, according to press reports.

A calendar alert shows an appointment between Smith and Eric Schwerin, the president of Hunter Biden’s investment firm Rosemont Seneca, in the Eisenhower Executive Office Building on Feb 20, 2015 at 4 p.m.

Except for Davies and Reicher, none of the other people who had worked for Google responded.

Davies’ comments sum it up — it was about trading on the father’s name and seeing what could be brokered out of it. What was the involvement of the U.S. officials in Hunter’s business efforts? Were there conflicts helping him make his deals? We see his father had no compunction about flying him on Air Force Two or meeting with Hunter’s business associates in the vice president’s office. What else was done to help facilitate his deals? Then what were the contacts with Google about, and did they relate to their involvement in the Obama/Biden Administration?