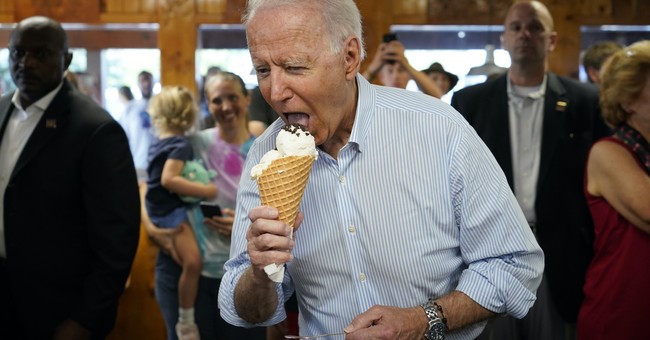 For the last several weeks the White House has been vehemently denying that the nation was staring a recession in the face, despite the fact that growth clocked in at -1.6 percent in the first quarter and there was no reason to believe things had rebounded in the second quarter. Still, administration officials from Treasury Secretary Janet Yellen to Press Secretary Karine Jean-Pierre insisted everything was fine.

Unfortunately, things are not fine, and as many of us predicted (because it was that obvious), the United States now appears to be in a recession according to the latest growth tracking from the Atlanta Federal Reserve.

A Federal Reserve tracker of economic growth is pointing to an increased chance that the U.S. economy has entered a recession.

Most Wall Street economists have been pointing to an increased chance of negative growth ahead, but figure it won’t come until at least 2023.

However, the Atlanta Fed’s GDPNow measure, which tracks economic data in real time and adjusts continuously, sees second-quarter output contracting by 2.1%. Coupled with the first-quarter’s decline of 1.6%, that would fit the technical definition of recession.

“GDPNow has a strong track record, and the closer we get to July 28th’s release [of the initial Q2 GDP estimate] the more accurate it becomes,” wrote Nicholas Colas, co-founder of DataTrek Research.

While a recession doesn’t become “official” until a group of nameless government officials says so, no one should be naive enough to believe that the Atlanta Fed’s tracking is so wildly off that the second quarter actually saw positive growth. Even looking at the fundamentals, there’s just no argument to support that assertion. How could US GDP have grown in the midst of a supply chain crunch, an inflation boom, and gas prices averaging $5 a gallon nationally, all of which depress economic activity? Suggestions of such simply make no sense, and it is clear we have now suffered two straight quarters of economic decline, with a likely third quarter on the way. That, by definition, means we are in a recession, whether those married to “the narrative” admit it or not.

With that reality front and center, there’s every reason to believe things will only get worse from here. The Fed’s quantitive tightening has barely begun, with interest rates set to rise precipitously over the next several years. Rising interest rates historically lead to a decrease in growth. While that should help tame cost increases, it means stagnation at best in the economy.

We are in this position for one simple reason: Joe Biden.

Had the president not pursued an unnecessary strategy of extreme spending, including the $2 trillion American Rescue Plan, the economy would have had a softer landing. Inflation would have been curtailed and the path through the minefield would have been more straightforward. Instead, Biden refused to accept a little bit of temporary pain, backing the country into a corner that will now entail a lot of pain to get out of. Why? Because he was scared of the political consequences. It’s insane that we’ve arrived at a place where we have to choose between double-digit inflation, negative growth, or some combination of the two, otherwise known as stagflation.

What’s more insane is that you can expect the White House to continue gaslighting the issue, not admit that we are in a recession, and pretend your eyes are lying to you. Regardless, the pain has arrived, and no amount of obfuscation will save Americans from it now. There’s only one way out of this malaise, and that’s a period of economic degradation. Biden will not, in fact, be the first president to defy the laws of economics.