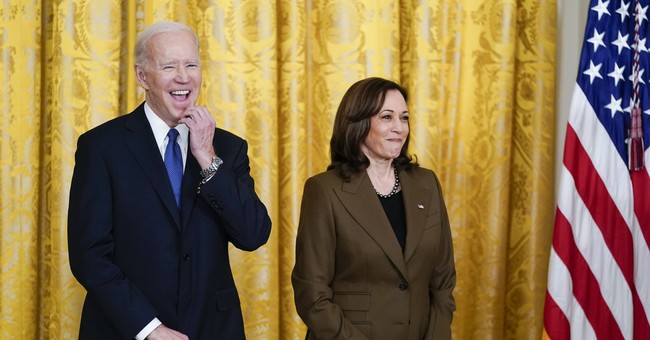 Pretty much any time Vice President Kamala Harris speaks in public, nonsense and wacky word salads gush forth, and that was definitely the case during a Monday one on one she did with CNN anchor Dana Bash, as we previously reported.

But though Harris widely missed the mark when asked various questions about the Supreme Court ruling to strike down Roe v. Wade and what the administration planned on doing to “help” women in the aftermath, one answer she was initially unequivocal on was in response to a question from Bash as to whether or not she would lead the ticket if President Biden decided not to run for reelection in 2024:

Harris did not mince words when asked about 2024, as some critics have questioned whether the 79-year-old President will seek reelection. Bash asked her about comments from House Majority Whip Jim Clyburn, a Biden ally representing South Carolina, that if the President did not run, Clyburn would support Harris leading the ticket.

“Joe Biden is running for reelection, and I will be his ticket mate,” Harris said. “Full stop.”

Here we are two days later and Harris has now issued a rather curious clarification to her original comments according to the Los Angeles Times, which noted that she intentionally sought out reporters on Air Force Two specifically to revise what she’d told Bash earlier this week:

“The president intends to run and if he does, I will be his ticket mate. We will run together,” Harris told a Times reporter Wednesday as she prepared to depart for California aboard Air Force Two.

Advisors had told the reporter that Harris wanted to come to the back of the plane to clarify what she told CNN on Monday.

The L.A. Times also noted that an “in-the-know” Democrat stressed to them that “Harris’ follow-up statement was intended to avoid using ‘trigger words’ that would set off requirements for Biden to establish a formal campaign with the Federal Election Commission and begin fundraising.”

Right. Sure it was.

What happened here is that Harris got over her skis on the question, which she should have been better prepared to answer considering the rampant speculation as to whether Biden will run again and if he doesn’t if she’ll throw her hat into the ring (or if other prominent figures will should Biden bail).

But in attempting to shut down that speculation, Harris only ended up adding fuel to it with definitive remarks that left no room whatsoever for any alternative interpretations. Now the big question is why did she change her statement?

Even on the most basic of questions – and one that is often asked – she still can’t get it right. This woman continues to be so bad at what she does, which will only lead to more debate among Democrats about whether or not she should be a leading contender to replace Biden in 2024 in the event he bows out.

Twice-failed Democratic candidate for president Bernie Sanders is already openly putting out feelers for a possible 2024 run depending on what Biden decides. Expect more to do the same if the rumors grow louder and Harris’ approval ratings remain in the basement.