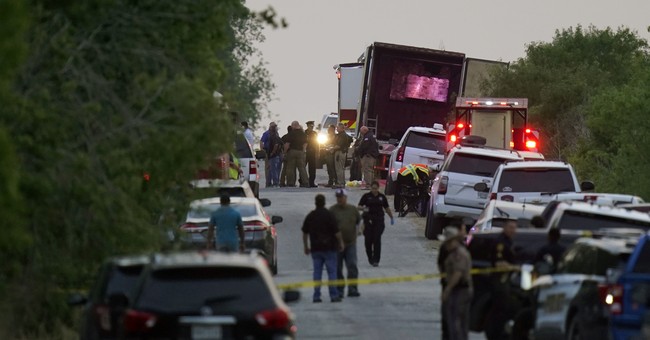 As the death toll grows to 53 in the horrific migrant truck deaths, Vice President Kamala Harris has decided who is to blame: former President Donald Trump. In an NPR interview Tuesday, she said we “need to take seriously the fact that we have a broken immigration system that was decimated by the last administration. And we’ve been trying, and we are on the path doing it, to fix that broken system.”

The system that was “decimated by the last administration” actually performed notably better than the current Biden-Harris effort. The attempts of the current regime to “fix the system” have led to an all-time high in illegal border crossings.

Harris was also quick to bash Republicans who criticized the administration’s policies in the wake of the tragedy, singling out Texas Governor Greg Abbott:

How the governor of that state responded really highlights part of the problem because his response when there are 50 dead bodies in his state is to go straight to politics. Instead of dealing with the realities of the issue.

She was responding to Abbott after he issued a tweet on Monday:

Exploiting vulnerable individuals for profit is shameful, as is political grandstanding around tragedy, and my administration will continue to do everything possible to stop human smugglers and traffickers from taking advantage of people who are seeking to enter the United States between ports of entry.

How hypocritical to complain about “political grandstanding around tragedy,” while in the same breath you’re taking shots at Trump and Abbott. Her lack of self-awareness continues to be stunning.

The details of the deaths grow more gruesome as we learn more. Turns out the driver who abandoned the truck was drugged out and had a long rap sheet. “He was very high on meth when he was arrested nearby and had to be taken to the hospital,” a law enforcement official said.

The driver had abandoned the truck next to a railroad track after apparently experiencing mechanical problems. Forty-six migrants were pronounced dead at the scene, and more died overnight at area hospitals. The staggering toll makes it “the worst one we’ve seen in the U.S.,” said Craig Larrabee, acting special agent in charge of Homeland Security Investigations in San Antonio.

“The organizations are getting more violent — they don’t care about the people,” he continued. “They don’t think of them as people. They think of them as commodities.” Law enforcement officers also tracked down and arrested two associates, both Mexican nationals who were living in the U.S. illegally.

Despite the catastrophe, Harris, named the “Border Czar” by Biden in March 2021, continued trying to defend the administration’s failed border policies:

There have been over 2,000 arrests just in the last three months. I think there are at least eight indictments that have happened. We need to deal with that, right, in terms of the consequences of criminal behavior that results in death.

The rest of the Biden Administration has been equally unimpressive in their response. Biden was asked by a reporter Tuesday if he had any reaction to the mass death event. His response was to simply walk away:

Meanwhile, as my colleague Nick Arama reported, Press Secretary Karine Jean-Pierre was almost comical with this whopper Tuesday: “The fact of the matter is the border is closed,” she claimed.

The Biden Administration’s inept policies led directly to this sad event, as lax enforcement and a seeming desire to simply ignore the border have turned the Rio Grande into the Wild, Wild West. Harris can blame Trump, rip Gov. Abbott, or put it on Putin, but it won’t change the fact: these deaths are on Biden and Harris.