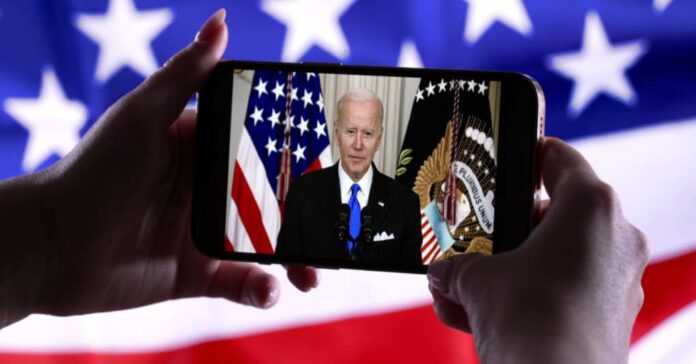 We have to wonder who is running our country. It’s supposed to be an elected official because that’s the way our democracy works. Technically, it should be President Joe Biden and Vice President Kamala Harris. However, we’ve been left to wonder who is pulling the strings on Biden since he looks terribly lost every time he wanders onto a stage. And VP Harris hasn’t been making too many public appearances at all.

In a meeting that Biden had last Thursday with wind executives, reporters noticed that he had detailed notes about what he needed to do.

It’s not uncommon for the president, or anyone for that matter, to have a few notes about what they are going to speak about.

That’s not what these notes were.

Biden momentarily flashed these “instructions” to the cameras before things began. Reporters were all too happy to take some photos, which were analyzed a bit later.

If the President is actually capable of being President, he shouldn’t need such detailed notes about how to walk into a room and how and when to ask questions of the executives he is meeting with.

These notecards confirm suspicions that we have long had – that Joe Biden is mentally unsound to perform the duties of president. This is what the 25th amendment was created for – replacing the president “in the event of death, removal, resignation, or incapacitation.”

Since Biden won’t resign, there’s nothing left but to identify that he’s incapacitated. At 79 years old, there’s no shame in this. Most adults in the workforce retire at 65 – so it’s ridiculous that we have a president who is running our country at the age that he is.

There’s a bigger question that we have to ask, though. If Biden needs such detailed information to enter a meeting, who is running the country. Obviously, it’s not him. And it’s not Kamala Harris, either, because she’s not being given any responsibilities. We hardly ever hear from her, except for a few random tweets here and there.

Is it Nancy Pelosi? Is it Chuck Schumer? Is it someone else in the White House who isn’t even an elected official? It’s a question that we all need to be asking right now.

Republicans have been questioning Biden’s mental capabilities for a while now – and Representative Ronny Jackson (R-TX) along with 37 others actually sent a letter to the White House in February calling on Biden to take a cognitive test. After all, we deserve to know whether he is capable or not.

Trump took one when the Democrats asked him to – and he passed.

Biden’s refusal makes us believe that even he knows he won’t pass the test.

White House officials keep dismissing the concerns over Biden’s mental capacity. It’s no surprise. Whoever is running the show wants to be able to continue to do so from behind the scenes. If Biden is forced to take the test, he’ll fail, and the White House will have no choice but to use the 25th Amendment to remove him.

That would leave us with Kamala Harris. It’s a terrifying thought, but at least we’d know who is in charge. We can’t have a president who has to use note cards to enter a meeting, telling him how to interact and when to sit. It’s ridiculous, and it puts us in an incredibly weak position with the rest of the world.

Karine Jean-Pierre, the White House press secretary, seemed surprised when she was asked about Biden’s “mental fortitude” recently. She responded by telling us that it’s not a question we should be asking and said, “Just look at the work he does. And look how he’s delivering for the American public.”

If her response was meant to assure us, it has only done the opposite. So, we ask again, who is running the country?