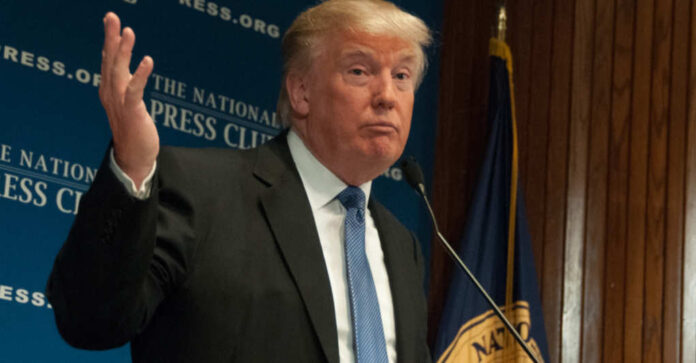 Former President Donald Trump has some definite ideas about what House Minority Leader Kevin McCarthy (R-Calif.) should have done with the House Select Committee investigating the January 6, 2021 riot on the Capitol.

Trump said that it was “not even a question” that McCarthy should have put Republican lawmakers on the committee.

McCarthy may have “thrown the baby out with the bath water” last year when he withdrew all of his GOP picks for the panel. He initially was asked to give Pelosi five names of GOP candidates for the panel. Speaker Pelosi immediately rejected Reps. Jim Jordan (R-Ohio) and Jim Banks (R-Ind.) because they objected to President Biden’s Electoral College victory. She accepted the other three that McCarthy had picked and asked him to submit two others in place of Jordan and Banks.

But McCarthy pulled all of his candidates in response to Pelosi’s actions. He said that unless Speaker Pelosi reversed course and seated all five GOP nominees, the Republican Party would not be a part of the “sham process” and they would pursue their investigation.

Regarding their ouster by Pelosi, Trump said that it would have been great to have them on the panel. He also said that when Pelosi “wrongfully” did not let them join, McCarthy should have picked other people. He said that there are a lot of good people in the GOP.

The panel investigating the attack on the Capitol does have two Republican members, Reps. Liz Cheney (Wyo.) and Adam Kinzinger (Ill.). They are both strong critics of the former president. And Trump also complained that GOP leaders not on the panel have had very little to say about the proceedings.

The committee has held three public hearings so far and will hold its fourth this week. They have spotlighted testimony from former Trump supporters and White House staff who have all talked about the former president’s claims of election fraud. Many have said they told Trump in 2020 that the claims were baseless.

Trump’s complaint about McCarthy comes just as he is planning a bid for the Speaker’s seat if the Republicans gain a majority in November’s midterm elections. The former president has not yet declared if he will support McCarthy to hold the speaker’s gavel.

The Republicans in the House have been silent about the January 6th committee hearings because they are pursuing their investigation. Their focus will be on laying the blame on the Capitol’s top security officials.

Former President Trump has released a 12-page statement in response to the hearings. He also spent a large section of his 90-minute speech over the weekend on the proceedings.

Trump was speaking at the Faith and Freedom Coalition Conference.

But the main focus of Trump’s frustration is still McCarthy. He said that it was a “bad decision” not to have Republican representation on the committee.

“That was a very, very foolish decision because they try to pretend like they’re legit, and only when you get into the inner workings, you say, ‘What kind of a thing is this?’ It’s just a one-sided witch hunt,” Trump said in a recent radio interview.

McCarthy may find it difficult to get the speaker’s position based on how he has handled the January 6 panel.