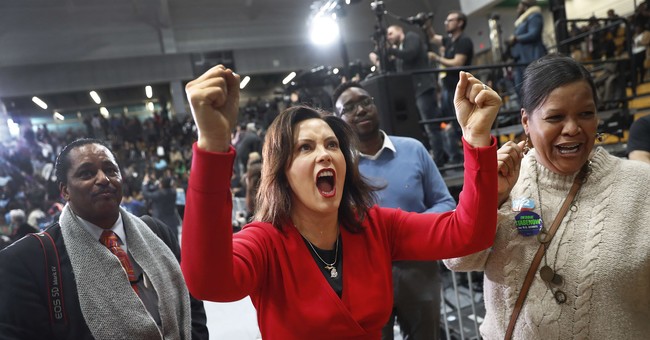 The fallout from the Supreme Court’s historic decision on Friday that gutted Roe v. Wade continues to reverberate across the United States of America.

The shock waves from that decision rolled into Michigan on Friday, and the Governor of the Great Lakes State, Gretchen Whitmer, with all of her wisdom, decided that she would ignore a state law that she has been elected to enforce.

A pretty gosh darn novel approach to governing, I guess.

As I wrote in a previous post earlier today, here at RedState, about the Dobbs decision LaDuke: Your ‘Lump of Cells’ Argument Is a Load of Manure, and have written many times here about the job that Gretchen Whitmer is doing in the state of Michigan, I feel we are at a bit of a crossroads in the Mitten state. The signs at this intersection are called “Will She” and “Get Away With It.”

This of course is yet to be determined because this is what elections are held for-and with the history of how Republican candidates fare in this state, I have some concerns.

Last week, I opined about the field of GOP contenders The Michigan Governor’s Race for the Republicans Is Finally Ready to Take Off. I’m hoping this race produces a strong contender to face Whitmer in November.

As I mentioned in my article linked above…

I’m no longer a registered Republican, and declared my Independence and embraced my libertarian streak many years ago. However, for this cycle of voting for Governor in the state of Michigan, I will wholeheartedly support whomever is nominated by the GOP. For the Republican nominee to win, they will have to be to sway those like me, who are neither Republicans nor Democrats, to win the day.

Michigan’s chief executive gave this response to Friday’s decision and gave the GOP a gift on Friday with this statement about Dobbs.

“Today is a sad day for America as an unelected group of conservative judges act squarely against the will of the people and medical expertise. We can all sense the despair that tens of millions of Americans–our neighbors, family members and friends–are feeling right now. However we personally feel about abortion, health–not politics–should drive important medical decisions.

“With today’s decision, Michigan’s antiquated 1931 law banning abortion without exceptions for rape or incest and criminalizing doctors and nurses who provide reproductive care takes effect. For now, a Michigan court has put a temporary hold on the law, but that decision is not final and has already been challenged. The 1931 law would punish women and strip away their right to make decisions about their own bodies. I am deeply disappointed that Michigan’s Republican legislative leaders have been in court defending this draconian ban, to the detriment of women and families. Some legislators have gone a step further, proposing a 10-year prison sentence for abortion providers and a 20-year sentence for anyone manufacturing, selling, or distributing birth control medication.

“I want every Michigander to know that I am more determined than ever to protect access to safe, legal abortion. Now is the time to use every tool in our toolbox to protect women and reproductive health care. That is why I filed a lawsuit in April and used my executive authority to urge the Michigan Supreme Court to immediately resolve whether Michigan’s state constitution protects the right to abortion. We need to clarify that under Michigan law, access to abortion is not only legal but constitutionally protected. In addition, my recent executive directive instructs all state departments and agencies not to cooperate with authorities from other states who want to prosecute women seeking legal abortion care and instructs departments to increase protections for reproductive healthcare.

“I will fight like hell to protect every Michiganders’ right to make decisions about their own body with the advice of a medical professional they trust. I will not give in or give up for my kids, your kids, and the future of our great state.”

How they were able to put that ending about NOT giving up on kids, without gagging in an irony puke pile, is truly an amazing feat.

The SCOTUS decision on Friday threw it back to the states, where this issue should have always been, and the Michigan law that Whitmer is suing to stop from being enforced is fair play.

Yet, let’s not forget Gretchen Whitmer was on the shortlist to be Joe Biden’s Vice President. This current administration is being led and supported by people who support the grotesque act of abortion until birth.

You have not heard anywhere that the Governor of the State of Michigan does not support that view. She wants no part of that debate because, along with all the other missteps she is had during her four years, she would be in big trouble with the economy tanking and her handling of Covid-19, plus not fixing the damn roads-and being a supporter of such a grotesque act as abortion until birth.

Her time in Lansing has been a mess, and it needs to end come next January.