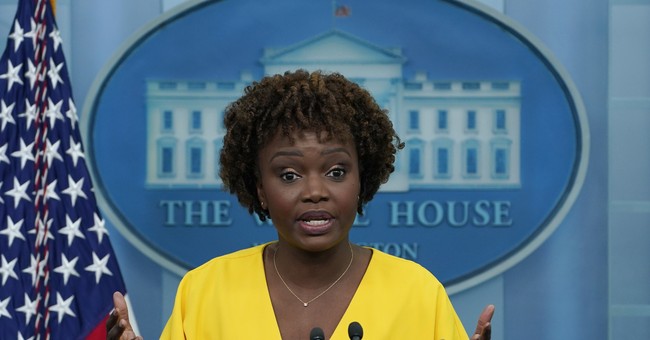 Is Joe Biden admitting that he knows the Democrats are going to get shellacked in the midterms and he’s hedging his bets?

It just might be, given what White House Press Secretary Karine Jean-Pierre said on Saturday.

On Saturday, when talking to reporters aboard Air Force One, Jean-Pierre pushed the false claim that the Court/Republicans were going to go after people’s right to contraception and other ‘rights’

MS. JEAN-PIERRE: We are concerned about that. If you look at what — what Justice Thomas said — he wrote expli- — explicitly that “In future cases, we should reconsider all of this Court’s substantive due process precedents.”

No, Republicans haven’t said any such thing, and the Court made it very clear such rights were not in jeopardy and that this decision only pertained to abortion. Democrats are deliberately miscasting what Justice Thomas said-but in any event, not the majority opinion of the Court.

Then Jean-Pierre made an interesting statement to reporters that is infuriating people on the left.

Jean-Pierre said that Biden did not agree with calls to expand the Court. She was cagey on the question of whether he was in favor of doing away with the filibuster, responding instead that if people voted for more Democrats, that would solve the issue in his mind.

So is it time, in the President’s view, to think about reforming the Court? And if so, what changes would he like to see?

Q And on that, what is the President’s reform on — position on filibuster reform? He says, you know, “Elect more Democrats.” Let’s say he got two more Democrats in the Senate who would be okay with killing the filibuster on this issue so he had 50. Would he then support that stance?

But that’s what we have to do. We got to make sure that we elect more members, or we have more members come in to — come in to Congress that can actually make a difference here.

But the point that I’m making is: I hear — I hear you — I hear your point about the filibuster. But I think if — if we’re able to — if Americans are able to use their voice at the ballot box, bring in more members into Congress that support this issue, then there is movement that we can make. There is a way that we can restore Roe. And that is the most important thing that we can do.

Initially, that was reported by a CNN reporter that Biden did not agree with doing away with the filibuster.

The transcript however didn’t quite say that about the filibuster, but it did indicate that she was being a bit cagey on it, that Biden wasn’t for saying now that he was for doing away with it.

So assuming this doesn’t get walked back — what does this mean?

It’s sort of a fascinating statement, given that Biden is usually ducking such statements and avoiding them whenever he’s asked. Why is he shifting (apparently) from the position he held even regarding ‘voting rights’? He’s not willing to go that far over abortion? Why is he now being definitive about court-packing?

Biden (or the handlers) may finally be realizing they don’t have the votes to flip anything, and that they are going to get shellacked in the midterms — that not even this issue is going to save them. If they do away with the filibuster now and pack the Court, they are only hurting themselves when they lose power. And he would be severely hamstrung in his final two years if they do. Now, this was obvious before, but maybe his handlers are finally absorbing this as we are now advancing on the midterms.

However, KJP saying what she did has now infuriated some on the left, the very people he needs to hold onto for the Democrats for the midterms. Maybe the Biden team is calculating that those people will be forced to vote for the Democrats in any event. But I wouldn’t bet on it. There are a lot of people infuriated, saying that response is not enough and this is a demotivating move to rally the base to vote, if Democrats aren’t going to do anything anyway.

The fury is something to behold. But that’s where they’re at now — in complete confusion.