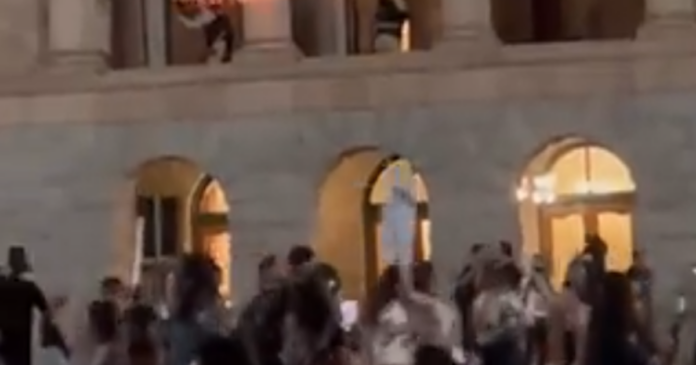 After the historic overturning of Roe v. Wade on Friday, the calls for mob justice rolled in fast and hard. Rep. Alexandria Ocasio Cortez called the decision “illegitimate” and told people to “fill the streets.” Rep. Maxine Waters demanded people “defy” the ruling, shouting “to hell with the Supreme Court.”

It seems some listened, and violence broke out in places like Seattle, DC, Los Angeles, and perhaps somewhat unexpectedly, Phoenix. RedState originally reported the unrest as it unfolded, with things deteriorating to the point of the police declaring an unlawful assembly and using tear gas.

Now, we are getting more details about what transpired, including the fact that rioters got close enough to force the state’s senate into a recess, stopping their special session, with members saying they were being held “hostage” by the mob.

Now, I’m not that old, but I’m old enough to remember when rioters forcing the business of government to cease, causing elected officials to be evacuated, was considered an insurrection. What was that thing called? Oh yeah, January 6th, the topic of the never-ending hearings currently being held by the Democrat-led House.

But this is different, I’m sure. I mean, these rioters are justified because they want to continue to have the “right” to kill babies in the womb. If that’s not a righteous cause for violence and interference in the governmental order, then what is? Besides, none of them are wearing red hats, and that’s really, really important when judging what is and isn’t an “insurrection.”

You see, the left doesn’t actually care about “insurrection.” They care about their political priorities, and they are willing to support anything that helps bring them to fruition. If a mob of rioters reinforces those goals, then they are given a pass, as we saw throughout the BLM riots of 2020. The “Night of Rage,” which was propped up by leftwing groups and promoted by leftwing politicians, will not be treated the way January 6th was. There will be no DOJ investigations, no solitary confinement for taking selfies, and certainly no drawn-out, politicized hearings on the matter.

I’m assured that these were just protests that got a bit too “loud.” It doesn’t matter that the end result, i.e. forcing the government to temporarily cease its duties while members fled into safe spaces, was exactly what previously defined January 6th as an “insurrection,” according to Democrats at least. Nothing matters but politics, and as long as the mob is pushing for the “right” thing, they will be treated with kid gloves.

Of course, things aren’t over. Saturday evening promises more violence as far-left activists get organized and rioters get off work. That, likewise, will be largely ignored, though.