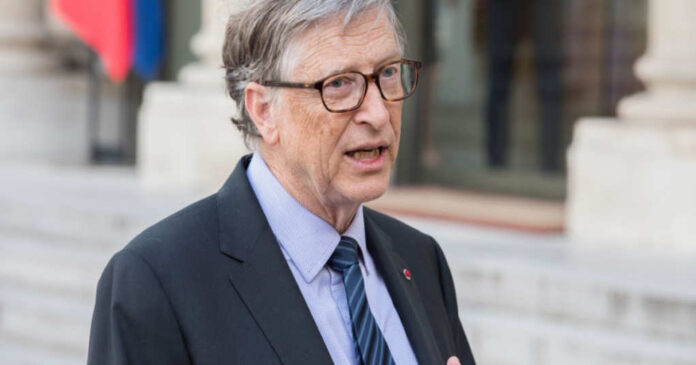 Imagine being so convoluted that you believe that animals are what’s going to kill the planet.

Now, imagine having so much money that you can force scientists to do your bidding.

That’s where we’re at right now – and the crazy person with all of the money is Bill Gates.

We need protein. It’s critical to our health. And any Christian knows that God put animals on the planet for us to feast upon.

However, there is a fear among liberals that there’s too much meat consumption. It’s no longer sustainable for mankind, which is why Bill Gates is urging rich countries, like the U.S., to switch to 100% synthetic beef.

Gates has written a book called “How to Avoid a Climate Disaster.” He suggests that we should be switching to synthetic beef because cattle are responsible for so many problems. The cattle consume grain and produce methane – two things that are bad for the sustainability of the earth.

Now, Gates promises that he’s both an optimist and a realist. He knows that it’s not realistic that poor countries can switch to synthetic beef because there’s too much of a cost. It’s why he’s optimistic that he can get the richer countries to make the switch. It will ensure that there’s enough beef for those who actually need it.

Ask anyone in Texas. Americans need a real steak. Made from cow. Not from some lab…

Gates is working with a number of scientists to create non-meat protein inside of vats. Yum, right?

California is all over it. Former NASA scientists are working with bacteria to collect CO2 from the air. Then, it is fermented into protein powder so that it can go on to be processed into a meat alternative.

Don’t we have enough processed foods in the world? Aren’t we supposed to be getting away from processing?

There are so many solutions to the meat crisis that don’t involve getting rid of the animals that produce the meat. There are incentives that the government could give so that cattle farmers could produce more…

Yet, none of those are even being discussed.

Instead, liberals want to shove carbon-neutral, animal-free protein on us, hoping that we won’t be able to tell the difference between that and a juicy ribeye.

Intensive farming ends up emitting a lot of carbon, which can be bad for the environment. However, intensive farming is also what needs to be done in order to produce plenty of life for us – both in the form of plants and animals.

Ahh, but there’s that other argument. If the cows are eating too much of the feed, which is being cultivated from the earth, it leads to deforestation.

That’s not really an argument, though. Many farms are capable of producing all that a cow is able to eat. That means that they are fully sustainable on their farms. It’s not as if forests are being cut down in order to feed cattle. It’s just the lie that the liberals tell so that we can agree to all of our food being produced inside of laboratory vats.

Many have no desire to follow what Gates wants in America. People know that he made software. He’s not a scientist. And people want to eat meat. They know that it provides better nourishment for their bodies, and it tastes better than anything that is made in a lab.

It just shows that liberals with too much money can be dangerous. They are set to ruin the country with their progressive ideas.

Meanwhile, as many want to cling to their meat-eating ways, they point out something that the liberal media won’t touch with a ten-foot pole. Not only have there been fires and explosions at over a dozen food processing plants, but Gates is also buying up farmland like it is going out of business. Coincidence? We’ll let you decide for now…