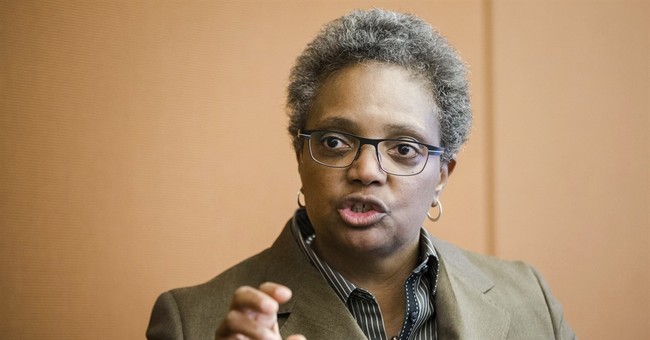 Chicago Mayor Lori Lightfoot isn’t even hiding the ball at this point. While her city continues to mimic a common dumpster fire, according to multiple reports, she’s decided that being an overt racist is the right path forward. Lightfoot’s spokeswoman asserted that the mayor will only grant interviews to “black and brown people” while refusing to speak to any white journalists.

Apparently, being anti-science and announcing she’s not lifting her city’s mask mandate wasn’t enough. I’m not sure what else you’d call this latest move except racism.

Racism is good again, I guess? This kind of support for re-segregation is a common facet of the ideology of the woke, with racially segregated “safe spaces” becoming more common on America’s university campuses, for example. Despite that, racism is racism, and any discrimination should be called out for what it is, even if some completely misguided individuals view it as some kind of “push-back” to soothe their emotional disorders.

Try to imagine what would happen if a Republican announced that they were only going to take interviews from people who are white? They’d be skewered and out of office within 24 hours. That racism has become so normalized from other corners in America is a sad commentary of our current societal moment. You’d think more people would speak out about this, but it’s passed over like it’s no big deal.

Of course, in regards to Lightfoot, her coming out as a racist is also just a convienant cover for the fact that she’s a failure and only wants to do interviews with people who won’t press her. By saying she’ll only take interviews with “black and brown” people, she’s able to narrow down the pool of journalists down to mostly those who are sympathetic with her. From there, she can pick and chose just to be sure she’s never asked a tough question.

The next question will be whether legal action could follow. Remember, we’ve had judges literally declare that Republicans can’t block people on social media so racially discriminating against the media seems a bit much, right?

Of course, I’d suspect that no news outlets in Chicago will have the guts or the conviction to sue so this is likely a moot point. Legal action could follow, but it probably won’t follow.

Claiming to fight racism by being racist is not a logical strategy, it’s a political one. Reporters should see right through this and call it what it is. I won’t hold my breath, though.