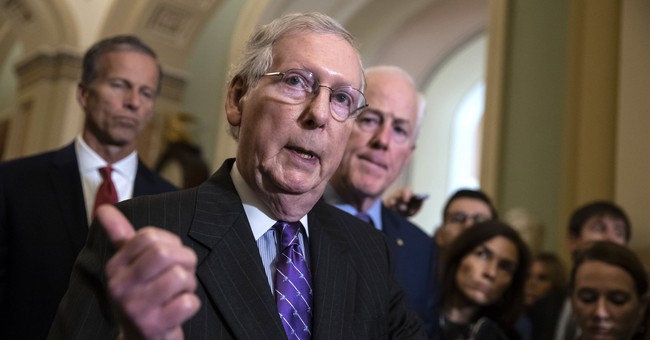 On Tuesday evening, the text of the new Senate gun control bill was released, with it being advanced by 14 Republican votes. Among those who gave their stamp of approval after just an hour of the 80-page bill being released were senators Lindsey Graham, Mitt Romney, Mike Caputo, and John Cornyn, with the latter being the lead negotiator on the legislation, working with Democrats to craft it.

RedState covered some of the most troubling provisions, including its funding of “red flag” laws while dumping billions into the partisan DOJ. A cursory reading also finds the funding to harden schools that Cornyn and others promised missing. That was supposed to be the big “win” for Republicans in this bill, but all I see are payoffs to federal bureaucracies and a few billion for community anti-violence programs.

That didn’t stop the “positive vibes” on the Senate floor, though. In fact, Cornyn previewed the next betrayal while yucking it up with Sen. Kyrsten Sinema: Immigration.

As I wrote in my initial critique of this push for a gun control bill, I’m at a total loss as to why any Republican, even those as unreliable as Cornyn, Graham, and the rest, would think stabbing GOP voters in the back is a good strategy headed into November. Do they want to lose? Actually, assuming they do might be the safest best at this point. What else could explain such political idiocy?

Right now, Joe Biden has the lowest approval rating of any president in polling history at this point in a presidency. Republican turnout is swamping Democrat turnout in primaries. Now-Congresswoman Mayra Flores even flipped a blue district in Texas that was held by Democrats for over 100 years. And this is the time to “compromise” on gun control and immigration?

But putting political strategy aside for a moment, there is no practical reason to be doing any of this either. The gun control bill is full of mostly useless fluff that would do nothing to prevent mass shootings. When it inevitably fails to do so, Democrats will simply push for confiscation having the leverage and justification to say “See, your ideas didn’t work.”

On immigration, there is zero indication that the Biden administration will enforce the law, no matter how much funding you send to the border. Put simply, the problems down there are not solely a money issue. They are a policy issue, and the president has actively chosen to undermine the system. So why give Democrats what they want on amnesty when it will result in nothing on the security side of things?

None of this makes any sense from any angle, and now is the time for voters to push back. Call your elected officials, speak out, and let your voice be heard. These kinds of capitulations are going to have profoundly negative impacts in the future. They must not go unchallenged.