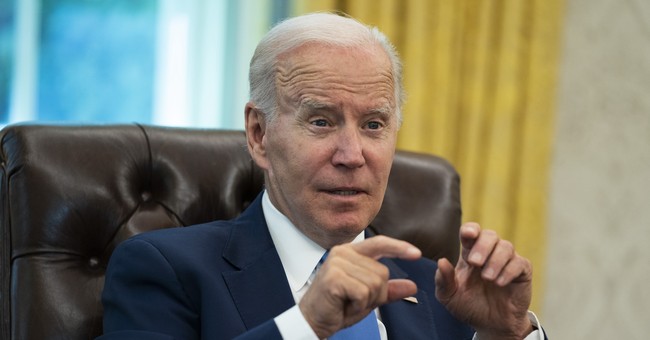 Joe Biden seems to be saying the quiet part out loud a lot lately, raising a lot of questions.

He made a telling comment the other day about who is making up his mind when he was asked about China tariffs. He replied, “We are in the process of making up my mind.” He implied he was waiting for the go-ahead from someone else, saying he was “prepared to sign it and I’m ready to go.” That of course raised questions about who is controlling him and who’s making the decision there. Then when he was pressed on gas prices his response was this was good because “we have a chance here to make a fundamental turn toward renewable energy, electric vehicles, and not just luxury vehicles, but across the board.” So if you suffer, just remember it’s for the common good of Our Dear Leader’s climate goals.

I don’t know what he’s on lately but he let more out of the bag today-and the way that he said it added to the creepiness of it all. When he was asked about the vaccines for children under age 5, he said he would be asking Congress for more money for that. But he said they also needed more money for something else.

“We need more money to plan for the second pandemic. There’s going to be another pandemic,” Biden said. “We have to think ahead. And that’s not something the last outfit did very well. That’s something we’ve been doing fairly well. That’s why we need the money.”

I don’t know about you, but that didn’t sound like “we need more to plan for any eventuality in the future,” that sounded like he knows a “second” pandemic is coming-that they’re planning for a second pandemic. He wasn’t saying it might come, he’s saying it will come. So, what does he know here? Can we expect it will arrive just in time, conveniently, before the midterm elections?

Of course, he’s always looking to spend our money at every opportunity.

But the other height of folly here is his description of how the “last outfit” did with the pandemic compared to how he has done. Talk about some rip-roaring lies. The “last outfit” are the people who came up with the vaccines and the plans. They’re the ones who had to deal with all the real problems at the start of the pandemic. Biden can’t even deal with the vaccines and all the treatments since developed, two years later. More people have died under Biden than died under President Donald Trump, even with all the help he got. Biden had said when Trump was in office that anyone who was in charge with so many deaths should leave the office. Yet he’s still there. The Biden team didn’t anticipate the variants which were eminently predictable. Even Kamala Harris admitted they didn’t anticipate Delta or Omicron.

They imposed mandates that threw people out of the military, threatened the security of the country, and cost countless people their jobs. Dealt with it “very well,” my eye. They scarcely could have done worse.