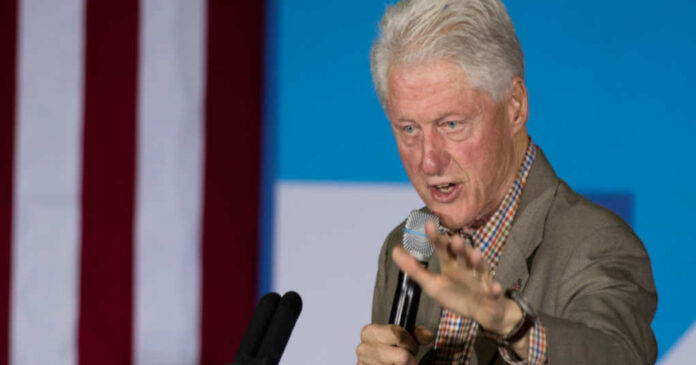 Former President Bill Clinton had some pretty threatening things to say about our country this week. First, he said that he’s never been so concerned about America’s “foundational future.” And then he said that there is a “fair chance” that the United States could “completely lose our constitutional democracy.”

Once again, Clinton took a seat on popular late-night TV. He was a guest on James Corden’s “The Late Late Show” on CBS. Corden asked him a question that alluded to former President Donald Trump’s presidency, without actually saying his name. The host asked Clinton how he stays “so positive in what has been a very, very dark few years.”

The former president started by saying that it was impossible to be pessimistic about the future when he is watching his grandchildren grow up. But then it got much darker…

He added, “Now, you shouldn’t be Pollyanna. I actually think there’s a fair chance that we could completely lose our constitutional democracy for a couple of decades if we keep making — if we make bad decisions.”

Clinton, who is now 75, talked about how he is not naive about things like this. He said that he’s been in a lot of fights and lost some and won “a bunch.” He has been both elated and heartbroken.

“But I’ve never before been as worried about the structure of our democratic form of government,” Clinton told Corden.

The former president is not alone. A poll was recently released that found nearly one-half of all Americans believe that the United States might “cease to be a democracy in the future.” This went across party lines. Fifty-five percent of Democrats and 53% of Republicans surveyed in the Yahoo News-YouGov poll indicated that they believe the country will “likely” not be a democracy one day.

The former president did say that he still has hope that his concerns won’t become reality. He said that thus far each time the country has faced our undoing, the American conscious has “kicked in” and we stepped away from “the brink.”

He believes that is what will happen today, but he did not know when or how. So he challenged the people of the country to “be vigilant” and to stand up for what we believe in. Clinton also said that we can’t return “hatred with hatred.”

These comments from Clinton come at the same time that the January 6th Committee holds public hearings that have been broadcast across multiple networks. The focus has been to show how Donald Trump and his supporters plotted to carry out an effort to overturn the results of the 2020 presidential election. These efforts reached a climax with the Jan. 6th attack on the Capitol.

Former President Bill Clinton also talked about gun reform and his plans to restart the Clinton Global Initiative. He spoke about the Senate compromise on new gun legislation, which includes grants for states to implement “red flag” laws and expanded background checks for those 18-21 to purchase weapons.

Corden had some things to say about this issue. “As someone who didn’t grow up here, I never will be able to get my head around it,” Corden told Clinton. “Why is it so hard for Americans to come to an agreement around this issue?”

Clinton responded that there was an overwhelming majority that wanted sensible gun safety measures, but the gun culture is so strong. Clinton also said that many gun owners “are intensely suspicious of government, easy to spook and they don’t want to take a chance.”

I wonder how many in America got that way?