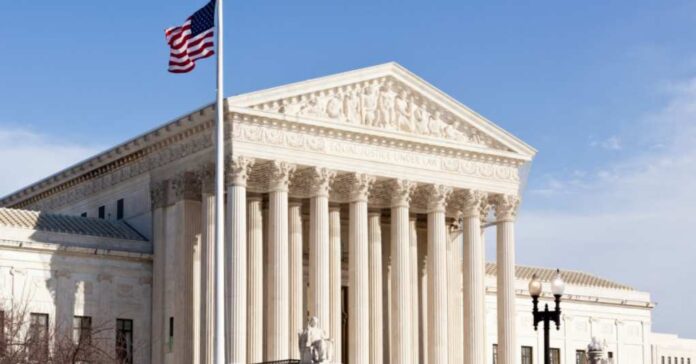 At this point, it would be a little hard to have not heard about the soon-to-be-decided Supreme Court case surrounding abortion and all the drama it has caused in Washington, DC. I mean, the case itself is something for the history books, as it could very well end up in a complete overturn of the infamous Roe v Wade case that made abortion federally legal in the US back in 1973.

Should the case side with the state of Mississippi, and in doing so, against Roe, abortion would likely be made into a matter that state legislatures, and not the federal court, could decide upon when, where, and how it is done.

Naturally, plenty on the political left do not want the case to go that way. And some have, unfortunately, stooped to intimidating and menacing any and all SCOTUS justices who may be tempted to vote against those wishes.

If you haven’t heard, protesting has been going on for a few weeks or so now at most conservative justices’ private residences and the Supreme Court building itself with that sole purpose in mind. And it has forced the High Court, as well as Congress, to consider increasing security for those justices, as well as their immediate families.

This is of particular concern after this past weekend, when a man armed with a gun, knife, duct tape, and zip ties entered the private property of conservative Justice Brett Kavanaugh and attempted to kill him and his family. The man was quickly arrested and charged with attempted murder.

However, it brings the issue into the light that much more.

And so, on Tuesday, the House of Representatives voted to pass a new law that provides members of the Supreme Court and their immediate families with 24-hour protection.

Of course, there was opposition to the bill.

As more than a few Republican Representatives noted, that opposition came from the left alone.

But to understand just how demented those who opposed it are, we must go back about a month. You’ll remember that about a month ago, the Supreme Court began deliberating on this abortion-related case. As with every case and its deliberations, “opinions” are written up by various justices or groups of justices, basically just letting the rest of the High Court know where they stand on the issue and what problems with the potential verdicts they may or may not have.

Justice Samuel Alito, a conservative member of the High Court, and several others of his party wrote up an “opinion” suggesting that Roe had serious problems and that it should be overturned. Usually, these opinions are kept very confidential. However, somehow this one, as well as its source, was leaked.

And immediately, outrage from the political left arose, as did the protests against those conservative justices. Alito and his family have even been forced to go into hiding for their safety.

It was at this time that the bill the House just passed was proposed. And the Senate passed it unanimously in the blink of an eye.

However, here we are a month later, and the House has just now accomplished that.

Well, because the Democrats, which have the slimmest of majorities, have delayed it time and time again.

As The Hill reported, House Minority Leader Kevin McCarthy has made three attempts to pass the bill up until now. And every time, House Dems stalled it, claiming to want to expand it some. But expand it, they did not. Instead, they’ve just voted against it.

The game-changer this last time is that a justice was nearly killed or at least had a very attempt on his life taken. Perhaps this moved a few Democrats to finally decide that security measures for these justices needed to improve for their safety and the safety of the Supreme Court.

Too bad it had to come to that before they saw reason.

Now, of course, that doesn’t mean the bill was unanimously agreed upon. On the contrary, 27 Democrats, including those like “squad” member Alexandria Ocasio Cortez, were unwavering in their no vote.

Apparently, she and her heartless colleagues would rather see innocents killed than abortion (another killing of innocents) be limited in the slightest.