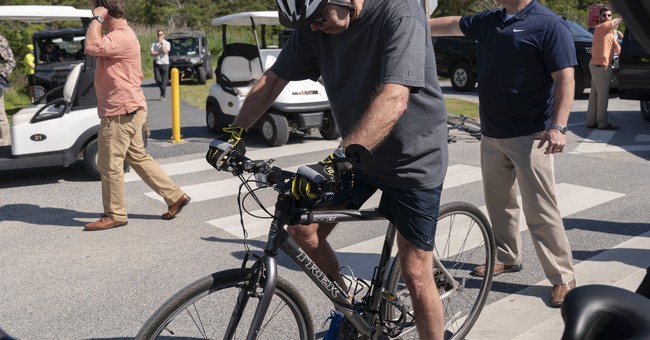 There are only two states in which he has higher approval than disapproval — Hawaii and Vermont — but even in those states, the approval is under 50 percent. Hawaii is 49 percent approval to 39 percent disapproval and Vermont is 45 percent to 38 percent.

If we look at the states that are going to have critical Senate votes in November — Arizona, Pennsylvania, and Georgia — Biden has woeful approval numbers. That bodes well for the wave helping the Republican candidates in those states.

But a new Issues & Insights/TIPP poll is also decimating Biden’s excuses for inflation which have included Putin’s Price hike, oil companies, shipping companies, and President Donald Trump. He’s even blamed the American people for not appreciating him, blaming their “mental health” because of having to deal with COVID. The American people don’t believe that.

Even most Democrats know where the blame lies — squarely with Joe Bidden.

Is it any wonder that Biden has been more vocal this week trying to talk about his efforts to bring prices down? But it’s far too late to try to scramble now that he’s seeing the polls. He should have cared while inflation has been pounding Americans for more than a year.

The Gallup poll is also horrific for Biden and it’s going to make him throw another tantrum because it shows how badly he is doing in comparison to President Donald Trump again. Biden had a 36-point drop since last June on the economy, a negative 32 percent difference now, with only 14 percent thinking the economy was good and 46 percent thinking it was poor. The poll also showed Trump’s numbers at the same time in his term.

The difference is stark — Trump was up a net positive on the economy +38. That’s a 70-point difference below Trump for Biden.

Finally, that net negative 32 percent is the lowest in any midterm election year, worse even in 2010 when Barack Obama had a negative 31 and lost 63 seats to the Republicans.

The satisfaction number is also at the lowest of any midterm year.

All the polls are backing each other up and saying the same thing — that the Democrats should get wiped out, it’s just a question of by how much.