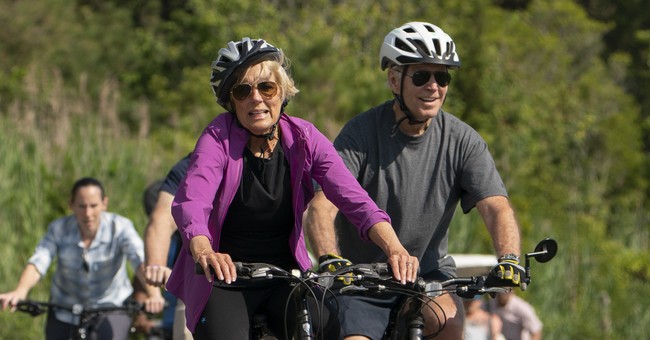 As we reported earlier, Joe Biden went off on a reporter for daring to ask him about economists forecasting a recession. Biden doesn’t like being challenged and he shot back at the reporter, saying no, a majority weren’t predicting a recession, “The majority aren’t saying that. Don’t make things up.” But, of course, the reporter wasn’t making things up, even if Biden didn’t want to deal with the reality that a recession may be looming.

But that wasn’t all Biden said in that exchange. “But all kidding aside, no, I don’t think it is [inevitable],” Biden said. “I was talking to [former Treasury Secretary] Larry Summers this morning and there’s nothing inevitable about a recession.” That may be, but he also missed Summers saying that a recession was likely by the end of next year.

Biden has tried to blame everyone and his mother for inflation and in doing so has shown that either he has no understanding of what causes inflation and/or he just doesn’t want to stop his profligate spending that helped to kick it off.

On Monday, he found a new person to blame for it. Biden has blamed Vladimir Putin’s invasion of Ukraine, making himself look very weak in the process if Putin has that much control over our economy (he doesn’t). But he’s also blamed oil companies, meat producers, and shipping companies, among others. Now, he’s blaming President Donald Trump for his 2017 tax cut.

Biden said, “We also can move in a direction that we can provide for tax — increasing taxes on those in the corporate area as well as individuals as it relates to [former President Donald] Trump’s tax cut, which is inflationary,” Biden said. “You know, going out and buying a yacht doesn’t help the economy a whole lot.”

On top of that, not only didn’t the tax cuts cause inflation, they benefitted most middle-class Americans. Not just people buying yachts as the nasty Biden sniped. But Biden has lied about that for years, and continues to do so.

Perhaps most importantly, here he comes again with more taxes — he’s promising more taxes on individuals and corporations which will only make inflation worse and increase the hardship on the American people. He is utterly economically ignorant and/or he simply wants to crush Americans.

Biden went on to say that his team would be meeting with (read: further threatening) oil companies this week. Then, once again, he revealed what an opportunity all this pain was.

“We have a chance here to make a fundamental turn toward renewable energy, electric vehicles, and not just luxury vehicles, but across the board. And that’s something we should be — my team is going to be sitting down with the CEOs of the major oil companies this week,” Biden said.

That’s what it’s about — he keeps saying the quiet part out loud. And if it hurts you along the way to their goal, oh well. Too bad, so sad.