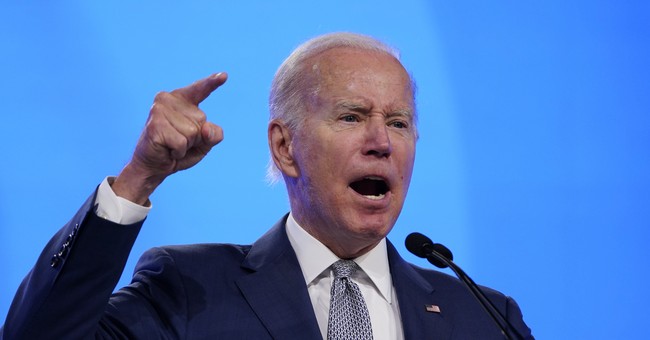 Joe Biden is currently enjoying another vacation after spending the weekend in Delaware. That the country is experiencing its highest inflation yet under his tenure and that things are generally not good domestically and abroad doesn’t even seem to compute. The old man is enjoying himself on your dime, and he doesn’t care how that affects you.

Still, every now and then, a reporter will get close enough to Biden to ask him a question. That happened on Monday when one such reporter made the mistake of asking the president about the fact that many economists are predicting a coming recession following last quarter’s negative growth. Instead of answering the question, Biden snapped — something he’s been prone to do the last several years.

To start, Biden is purposely lying (very likely) or he’s just highly misinformed. It is true that a majority of recently surveyed economists believe a recession is coming, and who would doubt that given the spate of bad economic news that has dropped since the start of June? Inflation now sits at an eye-watering 8.6 percent. Interest rates are also sky-rocketing, which will lock out investors. Biden has steered us into a corner, and the only way out is a recession. As former Obama economic advisor Larry Summers said on Sunday, there is no historical precedent for not entering a recession at this point if inflation is to be tamed.

The president is an angry, old man, though, and nothing gets him more upset than when reporters dare to ask him even basic questions about his record. Biden continues to stick his head in the sand, lashing out at the reality that he built with his own terrible decision-making. It’s bad enough that he’s on vacation again, but for him to snap on a reporter for asking about the economy is just a bad look.

Apparently, Biden’s daughter and granddaughter realized that because they eventually stepped in to rescue the beleaguered president, telling the reporters that they couldn’t ask any more questions.

Every time I watch videos showing Biden being ushered away by various handlers, I’m left asking how long this can go on? Can he really keep this up until 2024? I have my doubts, and the idea that he’s going to run for re-election is laughable.