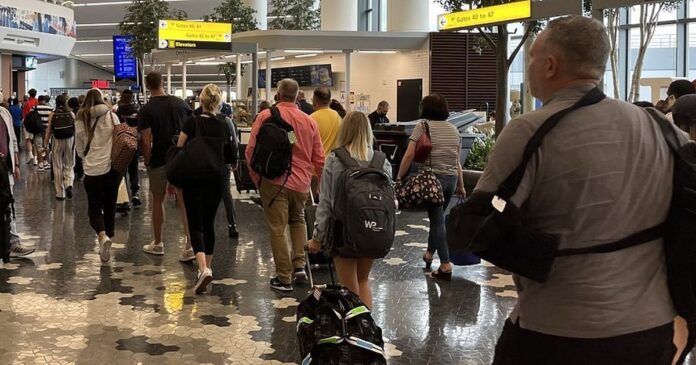 Over ten thousand flights were canceled across the nation this weekend, leaving frustrated, desperate passengers stranded in airports thousands of miles from their homes. Ten thousand flights. It’s almost too many to comprehend.

If you read my travel-hell story from Thursday night, you’ll know that I was one of those passengers, and that after my flight was canceled, I was forced to get a rental car (at my expense) and drive 12 hours through the night to get my minor children, who were being let out of camp. My kids could go get a COVID vaccine, a tattoo, and probably an abortion too, but the one thing they would not be allowed to do is check into a hotel room without an adult present.

Today (Sunday), it would seem that we’re victims of double jeopardy: our flight to Los Angeles was summarily canceled, and we have no way of getting back today. The airline’s best offer is two days hence.

It’s one thing to drive from NYC to Savannah, and quite another to drive from Savannah to California (35 hours). We’ve managed to score seats on another carrier, but they didn’t come cheap.

On Thursday, JetBlue and other carriers laughably claimed that they were canceling the flights because of weather. This was garbage, as the weather where we were (NY) was perfect. Why would they do this? If they can claim it was the weather, they don’t have to pay for your meals, your hotel–anything. (Yes, there were some scattered thunderstorms across the nation. Hardly enough to cancel 10,000 flights.)

Thankfully, for my second canceled flight in three days, they’re admitting other issues besides the weather, and so the potential of a reimbursed hotel room glimmers in the distance.

These cancellations come at a heavy price, however. The hotel we had prepaid for Friday night is not letting us off the hook, and we’ve had to pay for a rental car for several days, in addition to extra hotel stays and meal costs. All in all, the unbudgeted costs will certainly run into the thousands.

Many people caught in this mess are really hurting. “I closed my business for several days to take my son on his first trip,” a guy says to me. “I’ve lost thousands of dollars, and we aren’t on vacation, and now I’ve got to come up with more money just to find a place to stay tonight.” Next to him, a woman cries.

How does this keep happening in America, over and over? (By the way, things were no less of a disaster over Memorial Day weekend.)

Mostly it’s due to staffing shortages: pilots, crew, and air control. This is partly due to the fact that the Biden Administration mandated vaccines for pilots and other personnel, many of whom either quit or were fired for refusing. Guess what, Joe; you need pilots to fly planes.

Like many industries, staff shortages were a long-running problem before the pandemic but the pandemic made it much worse as airlines were forced to furlough or let go of workers in the thousands.

But no worries, our Boy Wonder, Transportation Secretary Pete Buttigieg, is here to save the day. He hadn’t shown much interest in the subject until his own flight got canceled Friday, and he was forced to drive from DC to NYC–an entire four hours. (There’s something comical about our Transpo Sec getting his flight canceled, I’m just saying.)

What is Buttigieg’s solution? Punish the airlines!

Pending airlines’ performance over the Fourth of July, the Department of Transportation could choose to take enforcement action if consumer-protection standards are not met, Buttigieg told AP.

He’s saying that he will fine airlines if they don’t hire more people. But where are these magical people, Pete? He also urged that airlines go under a “stress test” to see how they perform. I would argue that Memorial Day weekend and this weekend were stress tests, and the system utterly failed.

As usual, the Biden Administration is quick to pass around the blame: it’s the weather, it’s COVID, it’s Putin. Somehow, it’s probably Trump’s fault, too.

The fact remains, yet another mess is happening under this administration’s watch. It’s simply not the same America we’re all used to.