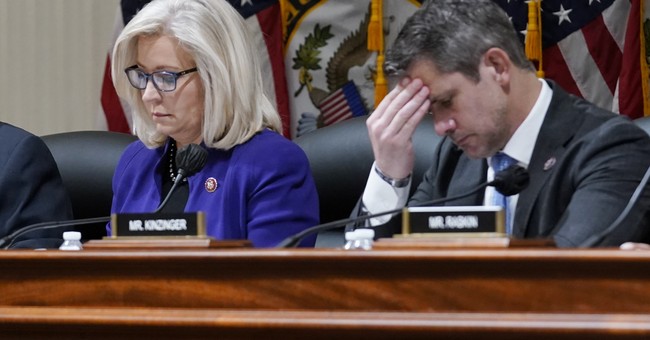 Let’s just be frank here, even if the Democrats will not be.

The Jan. 6 Committee has nothing to do with the truth or “justice.” It’s about trying to do all they can to hurt the Republican position before the midterms, and deflect from the horrible results of the policies of Joe Biden and the Democrats. Just as importantly, it’s about doing whatever they can to block out President Donald Trump from ever becoming president again, so they can hold onto their power.

They don’t get that the more they throw down on this exercise, the more it antagonizes most of the American people, who are concerned with the here and the now of the struggle the Democrats have made it to deal with the present.

But while the Democrats want to paint the Committee as some noble cause, a little bit of the truth about what it’s all about leaked out onto some of the networks on the Sunday shows.

Listen as they talk with a Republican who worked for Paul Ryan and John Boehner, Brendan Buck. Oh, he’s current and relevant. Not.

He tries to suggest that the purpose isn’t to try to influence the public, but to influence US Attorney General Merrick Garland.

Sure, that’s why they scheduled it for prime time. Because that’s when Merrick Garland watches television. Come on, guys. You wanted to influence the public. But it’s not working. They’re not watching, and it’s not changing their opinion. Be honest. NBC even shifted away to golf, because they knew that would get higher ratings.

Now, they’re trying to suggest it’s another purpose. But if Merrick Garland has to rely upon Rep. Adam Schiff (D-CA) for ‘evidence,’ he might as well pack it in now. Nothing they say would be reliable.

But that’s when Buck lets a little truth out — that the target of course is to prevent Trump from running again. “I think they’re trying to prove a case to the Department of Justice that there was a crime committed here,” Buck said. “And if there are political benefits, whether that — impeach Donald Trump from running for President again — great, that’s also I think part of the equation. But I don’t think that they think that there’s going to be a political movement so much that’s going to change enough minds that he’s no longer viable.”

Translation: it’s always been about blocking Trump. Impeach? Seriously? How delusional are these folks?

Even ABC’s George Stephanopoulos conceded that “most Americans are not paying close attention” to the illegitimate show trial put together by Democrats with a television producer.

In fact, “Meet the Press” wasn’t the only show trying to spin the hearings. “This Week” and Stephanopoulos had on Rep. Adam Kinzinger (R-IL). Kinzinger said Pres. Trump was involved “in the lead-up.”
“The president knew what he was doing. There was a plan.”

“Guilty of knowing what he did.” Well, that’s more than anyone will ever accuse Joe Biden of; he never knows what he’s doing. But that was the basic reaction to Kinzinger’s hot take.

Okay, then why didn’t the J6 Committee present that when you had the opportunity in primetime? Put your evidence on the table. But they didn’t, because they can’t. Because Adam is playing games with language here, too. What is he saying Trump is “guilty” of? Thinking the election was stolen? Objecting to the electoral count? Those things aren’t illegal-and don’t add up to involvement in the riot.

Again, if you had more, you would show it. Indeed, Democrats have filed electoral objections in the past against newly-elected Republican presidents, including against Donald Trump in 2017 and there was also a riot against Trump during his inauguration. Should we be going after the Democrats for that? Virtually all the over 200 people arrested regarding that violent riot on Jan. 20, 2017, had their charges dropped.

But again, they showed what they’re truly concerned about — that people aren’t paying attention to their spin, that Trump-supporting candidates are being elected — a good indication of what the American people think about all this.

Kinzinger kept saying “nothing has changed,” trying to suggest that there might be more threats to come and that the people who support Trump might get into power — horrors!

Pro-tip for Adam? The country is a mess right now, because of the guy and the party you’re trying to empower. That’s the real threat here, not a riot from a year-and-a-half ago. That’s the existential danger here. People can’t afford to live, and this is what you are spending your time on, thinking you are “saving democracy,” when you are trying to hand power to those who would do everything they could to injure our Republic.

But this is all the liberal media is willing to put forward for their viewers to deflect from those real Biden problems: Republicans who aren’t relevant or who aren’t even going to be in office in six months.