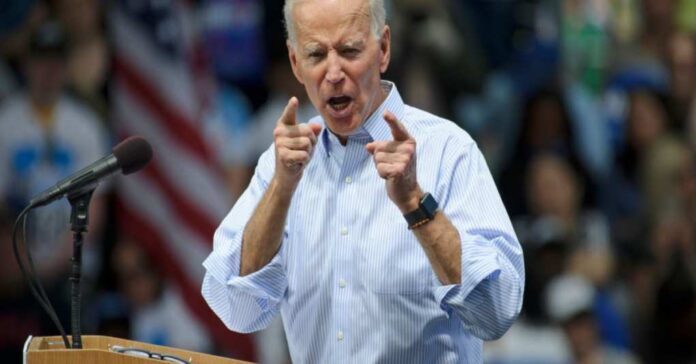 Biden hasn’t accepted the blame for anything that has gone wrong since he took office.

When Afghanistan became a debacle, he blamed it on bad intel.

When COVID cases rose, he blamed it on Trump.

And when gas prices started to get out of hand, he blamed it on Russia.

Nothing could possibly be a result of his poor policies, his insistence on using executive orders over Congress, or his constant need to put America second.

In an effort to boost his approval ratings, President Biden has set off on a tour around the country. And one of his first stops was to speak to union workers in Philadelphia this past Tuesday.

He acknowledged that there were record-high inflation rates associated with his administration. That’s when he said that Republicans are the ones blocking him from bringing the costs down.

“Jobs are back, but prices are still too high…COVID is down, but gas prices are up. Our work isn’t done.”

The way he puts it makes it sound as though his work in destroying America isn’t done. Seriously, Joe, you’ve done enough.

Biden wants his “Build Back Batter” plan to get passed through Congress. Yet, that’s only going to hurt the economy even more than it’s already hurting. Yet, that’s not what he tells union workers.

He doesn’t talk about how he’ll address inflation. Instead, he gives a “personal” experience so that everyone thinks that he knows what it’s like to struggle within today’s economy.

Then, he gets so fired up that he decides that it’s time to blame the Republicans. It’s the GOP’s fault that Biden is a lousy president, apparently.

“Republicans are doing everything they can to stop my plans to bring down costs on ordinary families. That’s why my plan is not finished and why the results aren’t finished either.”

Yeah…no one is buying that.

Biden only wants to help the country on his terms, which means also helping the secret allies that he’s in bed with – you know, like China and Saudi Arabia.

Old Joe decided to talk about tapping into the Strategic Petroleum Reserve so that more oil would hit the market. Did you see a price drop at the pump? I sure didn’t…

Biden also notes that they’re building grain silos along the border of Ukraine and in Poland to help to get grain out to the rest of the world. He thinks that will lower food prices. Hmmm…isn’t grain being produced right here in the U.S.? Oh, right – Biden is yet again putting the rest of the world first. We’ll only feel a small trickle-down effect in all of that.

Biden seems to be hell-bent on saying that “It’s taking time.”

We don’t have time. Americans are drowning financially NOW. They can’t pay their bills, they can’t put food on the table, and they can’t fill their gas pumps to get to work.

Biden has drunk too much of the liberal Kool-Aid to make a difference. The proof is right here: “I believe in bipartisanship. But I have no illusions about this Republican Party…The fact is Republicans in Congress are still in the grip of the ultra-MAGA agenda.”

So, while Biden banters on about how everything is the fault of Republicans, nothing will get done.

Meanwhile, ponder this. MAGA simply means “Make America Great Again.” Why is it a bad thing for the Republicans to have this kind of agenda?