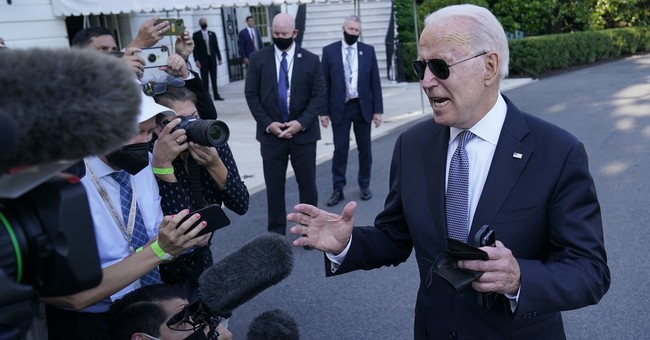 Joe Biden has spent the week assigning blame for inflation and skyrocketing gas prices. He had been trying to put it on Vladimir Putin, but this week, he also went all in blaming the oil and shipping companies.

He threatened the oil companies for not producing enough gas, without acknowledging that he’s been anti-energy and fossil fuels since he ran, contributing to the problem by stopping drilling, canceling leases, and imposing restrictions ever since he came in. He claimed the oil and shipping companies were doing this for greed and profit, without explaining why they suddenly ‘turned so greedy’ on his watch. This was nonsense, as we noted — an effort to shift away from his failures.

Biden also blamed the American people for being upset with him. He claimed they were “really, really done” because they had mental health issues as a result of the COVID pandemic. No, sir, they are upset because of your bad policies. That’s very sound thought about very bad policies.

But now that he’s blamed everyone else and taken no responsibility himself, he’s grabbed Jill and the cat, and headed out the door to the beach before noon on Friday for yet another vacation at his house in Rehoboth Beach, Delaware. Monday is a federal holiday so he’ll have a long weekend.

I suppose there are a couple of different ways of looking at how much vacation time he takes. One, he doesn’t give a darn about the mess he leaves behind, and two, maybe when he’s on vacation, he’s being a little less harmful to us than normal. But it just shows, once again, where his priorities are.

He couldn’t quite get away without the media trying to nail him and ask him some questions first. He stopped and was talking with them for a few moments, then Jill came to rescue him and try to pull him away before he said anything silly, yet again.

“It should not be this high,” the president told reporters on the lawn. “They’re making exorbitant profits, number one. Number two, I’ve contacted them, my team has, to ask what their plans are and to give any suggestions they have.”

Biden went on, “Number three, I think we’re going to be in a position where we’re gonna –.”

Now that might have been interesting to see if he continued with his thoughts, likely expanding on his threats against the oil companies, but his wife managed to stop him and ultimately pull him away after he told an Indian reporter that he would visit India in the future.

So they made it to Delaware, where they don’t have to report who they’re meeting with-and there aren’t records of his gaffes.

Joe had earlier tried to wiggle out of the claim that he was going back on his declaration that Saudi Arabia be made a pariah over the murder of Washington Post columnist Jamal Khashoggi, who was not an American citizen. But he’s planning to go to convince Saudi Arabia to help with gas prices.