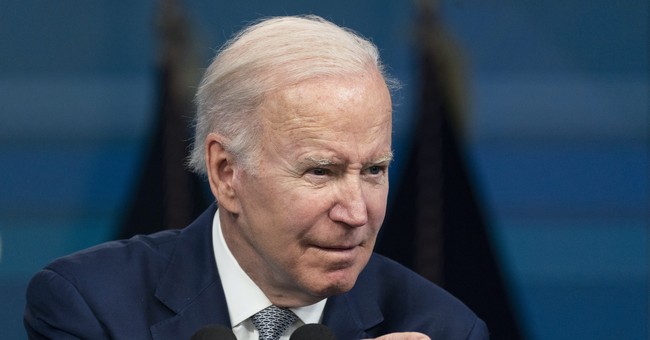 During Jimmy Carter’s presidency, he made remarks that came to be called his “malaise speech.” Not because he ever used the word, but because his assessment of the feelings of the Americans from the crush of inflation came off so pessimistically. It became the anchor on — and description of — his presidency.

Welcome to that moment for Joe Biden, with some added lies. Biden finally did an interview with the AP — after weeks of evading one. It was just thirty minutes, so it didn’t seem to cover a lot of material. But Biden got defensive during the interview, as he does whenever he is called wrong or is challenged. He claimed that a recession was “not inevitable” and then he lied his head off about the U.S. being better at inflation than the rest of the world.

“First of all, it’s not inevitable,” he said. “Secondly, we’re in a stronger position than any nation in the world to overcome this inflation.”

As for the causes of inflation, Biden flashed some defensiveness on that count. “If it’s my fault, why is it the case in every other major industrial country in the world that inflation is higher? You ask yourself that? I’m not being a wise guy,” he said.

The AP tried to spin a bit what he “meant” by that statement, suggesting he was talking about inflation “rising worldwide.” But his White House Press Secretary Karine Jean-Pierre essentially repeated the same lie when queried by Fox’s Peter Doocy, launching into a word salad. She mentioned the G7, saying that we were in a much stronger position economically “than the rest.”

Biden and Jean-Pierre’s remarks of course are lies.

He continued spinning nonsense, claiming that the thought that his American Rescue Plan had contributed to inflation was “bizarre,” that most economists didn’t think that and that there was “zero evidence” for the claim. “You could argue whether it had a marginal, a minor impact on inflation,” he said. “I don’t think it did. And most economists do not think it did. But the idea that it caused inflation is bizarre.” Even now, he still doesn’t get it/refuses to admit it. He repeated that he still wanted to try to push more spending through Congress.

The AP admits that Americans have “soured on his job performance.” That’s one way of putting it.

Only 39% of U.S. adults approve of Biden’s performance as president, according to a May poll from The Associated Press-NORC Center for Public Research, dipping from already negative ratings a month earlier.

Overall, only about 2 in 10 adults said the U.S. is heading in the right direction or that the economy is good, both down from about 3 in 10 in April. Those drops were concentrated among Democrats, with just 33% within the president’s party saying the country is headed in the right direction.

But what was Biden’s take on why Americans are upset? Carter said back then that people were suffering from a “crisis of confidence.” Biden being Biden was much less elegant He claimed Americans were mentally unwell as a consequence of the COVID crisis.

As for the overall American mindset, Biden said, “People are really, really down.”

If he wants to talk about Americans and attack their mental health for being unhappy with him, he’s not exactly the strongest demonstrator of good mental health, as we’ve seen over and over again. But since the AP curiously doesn’t seem to have released a video of the interview (wonder why), here’s Biden at his signing of the shipping bill on Thursday. This is the guy who thinks he’s doing a good job and is skewering the mental health of Americans, as he stares off into space and can’t seem to (or wouldn’t) even answer basic questions.

The issues are clear, and they’re not with Americans. He continues to refuse to answer the questions about his son as well.

Instead of a video of Biden, we got this from the AP with the reporter ‘explaining’ what Biden said rather than seeing it for ourselves.

They did provide a transcript which reads like one long rant that involves more lies, including about what Trump said about Charlottesville and exaggerating “teaching at Penn.”

Maybe they could explain why we didn’t see or hear the interview itself so that we could interpret what Biden said and how he said it ourselves, rather than listening to the reporter’s spin of it?