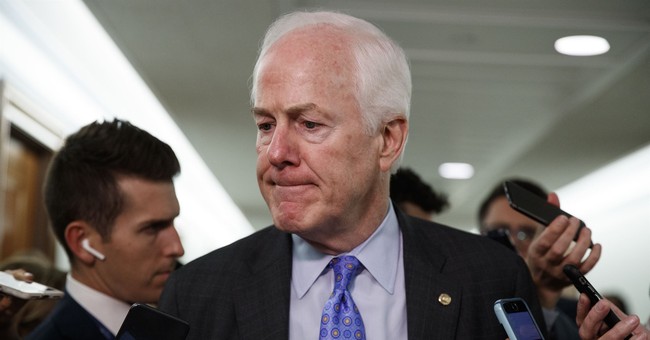 Senate negotiations over “gun control” legislation broke down abruptly on Thursday after Sen. John Cornyn (R-TX) walked out. The bill was expected to pass quickly, and an initial framework seemed to be broadly supported by both Republicans and Democrats.

But as is the way of Washington, the devil is in the details, and who could have possibly guessed that Democrats would attempt to take a few more bites of the apple on the way?

Reuters has the report.

The lead Republican negotiator in U.S. Senate negotiations toward a bipartisan gun safety bill walked out of the talks on Thursday, dimming the likelihood of a vote on the legislation before senators leave for a two-week July 4 recess.

Senator John Cornyn told reporters that he had not abandoned the negotiations, but he was returning to Texas amid difficulty reaching agreement.

“It’s fish or cut bait,” he said. “I don’t know what they have in mind, but I’m through talking.”

As Cornyn points out, it’s supposed to be time to fish or cut bait. What are they even still negotiating about given the framework that was released? With the recess coming up, they needed to have agreed on the final text already.

Apparently, the hold-up involves two provisions: One dealing with funding for so-called “red flag” laws, and the “boyfriend loophole,” which is arguably not actually a loophole.

But in the days since, the talks have become bogged down in disagreements over two main provisions: how to provide incentives to states to create red flag laws, in which guns can be temporarily taken away from people who are deemed dangerous, and the “boyfriend loophole,” which allows authorities to block abusive spouses from buying firearms, but does not cover people who are not married.

Cornyn knows that most red states won’t try to enact red flag laws, and he wants those states to have the discretion to use that money on mental health services-one of the things that might actually prevent crazed high-school students from shooting people. Democrats are objecting for some reason, even though they’ve never previously met a dollar they didn’t want to spend.

As to the “boyfriend loophole,” I’m skeptical there are enough safeguards in place to enact such a law without it being abused. As another RedState colleague recently pointed out, you only have to look at the federal abuse of Title IX to understand what could go wrong.

If you want to understand what “closing the boyfriend loophole” opens the door to, check out what goes on in Title IX sexual harassment/assault hearings in colleges. Without a cohabitation requirement, you are fair game for any woman you went out with one time who wants revenge. If you feel in danger, get a restraining order and stay the hell away from the person. If you can’t qualify for a restraining order, then maybe vindictiveness, not personal safety, is your goal.

Regardless of what’s causing this “gun control” legislation to crash on the rocks, it’s a welcome development for many on the right that recognize the Democrats are not operating in good faith. Joe Biden himself has said that he and his party will not stop with this compromise. So why compromise? Why hand your political opponents the leverage?

In some alternate universe where you could guarantee this bill would be the end of the line, perhaps many Republicans could support it. There are some good things in it, and as gun-control bills go, it’s very mundane, not actually targeting any guns via bans, restrictions, etc. But we don’t live in that alternate universe. Cornyn may be realizing that, even if his realization is a little too late for comfort.