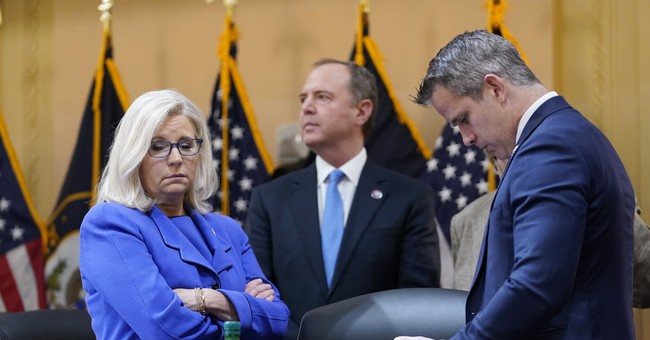 As we reported, the Jan. 6 Committee isn’t getting the audience that they hoped they would be getting. If the whole point of the exercise was to try to convince people that Republicans were evil and to vote for the Democrats in the midterms, the problem that they’re facing is that while people may not have liked the riot, they for sure don’t like how the Democrats and Joe Biden have destroyed the country over the past year-and-a-half since and they don’t like the political games being played by the Committee.

One of those games was calling as a “surprise” witness former Trump campaign manager, Bill Stepien. But he’s currently advising the opponent of Rep. Liz Cheney (RINO-WY), Harriet Hageman, in the Wyoming primary that will be held in August. Cheney knows she’s in deep trouble in her primary and then suddenly she calls her opponent’s adviser to have him grilled before the Committee? Can we scream conflict and politics here?

As it turned out, Stepien had a family emergency — his wife was having a baby and she was having issues, reportedly. So he didn’t testify today.

But what were they trying to adduce from him? Not anything about the riot, but what he told President Donald Trump about election results — that he told Trump there would be more votes coming in despite the fact Trump was leading the night of the election. Okay, so? What does that have to do with the riot? Answer: nothing. This raises again the question of what it is they are trying to achieve here if the witnesses they are calling have nothing to do with the riot.

It seems like the point of this is to attack Trump over his belief about the election. And so? If they want to go there, let’s talk about all the Democratic objections to the elections. Let’s talk about Hillary Clinton who still implies that Trump was an illegitimate president.

Democrats did everything they could to stop Trump from becoming president after he was elected. They tried to suborn the electors and get them to vote for other people so that Trump wouldn’t have enough. Guess who was keeping tabs and being briefed on that effort? You got it, the Clinton team including the now-National Security Adviser under Biden, Jake Sullivan.

But a batch of correspondence obtained by POLITICO shows members of Clinton’s inner circle — including senior aides Jake Sullivan and Jennifer Palmieri — were in touch for weeks with one of the effort’s organizers as they mounted their ill-fated strategy. And despite repeated requests for guidance, Clinton’s team did not wave them off.

Call logs, emails, and text messages reveal a Clinton campaign walking a tightrope — never fully endorsing the effort, but intentionally declining to stamp it out. The approach was comparable, one former campaign official said, to the campaign’s passive-but-not-dismissive response to long-shot recounts in Wisconsin, Michigan and Pennsylvania.

The Clinton team was also on board with trying to give the electors an intel briefing about Russian interference to potentially interfere in their vote. Even NPR asked: Was she trying to cast doubt on the election with this effort?

Then, the Democrats also objected to the electoral count (as they had multiple times in the past). Funny how once the Republicans did it in 2021, it was suddenly trying to “overturn the election.” Biden as the then-Vice President had to shut them down because the House members objecting didn’t have a Senator willing to sign aboard their objections.

Among the people who objected? Rep. Jamie Raskin (D-MD), now on the Jan. 6 Committee. He objected to accepting the Florida count on Jan. 8, 2017.

The Chair of the Jan. 6 Committee, Rep. Bennie Thompson (D-MS) objected to the certification in Jan. 2005 of George W. Bush.

As George Washington University law professor Jonathan Turley pointed out, there’s nothing wrong with employing the law to object, and Democrats have used it in the past. If you’re going to argue that the Trump team objected, so what? It’s provided for, under the law. As Democrats well know.

But let’s finish out what the Democrats and the folks did on the left after they objected on Jan. 8, 2017. Nearly 70 Democrats said they would be skipping the inauguration of Trump including Chairman Thompson who claimed: “The Russian hack was, at its core, an attempt to delegitimize our democracy.” So when Democrats object, they are saving “democracy” but when Republicans object, it’s “overturning the election.” The hypocrisy is stunning.

Then, what happened on Jan. 20, 2017? Radical leftists rampaged through D.C. smashing up businesses, setting fires, and trying to disrupt the inauguration. No one called it a coup. No one blamed the Democrats who had called the election of Trump illegitimate and did all they could to change the result. There was no special FBI page to hunt down the rioters. Virtually all the more than 200 people who were arrested ultimately had the charges dropped, far different from what happened with the Jan. 6 riot, and in the case of J20, the authorities had tapes of planning sessions, although not all of the people were involved in those sessions.

So what are they trying to do with the Committee if this is what they are putting forth and they’re not presenting any evidence of criminality?

Yes, trying to whip up the base and make people angry. But they’re also trying to raise money off of all this.

Raskin has appeared in a number of DCCC political ads asking for donations while speaking about the Democrats’ investigation into Jan. 6, according to Axios.

Longtime Democratic digital strategist Murshed Zaheed told Axios that the emails will boost campaign donations from the activists within the base who are most likely to give money but won’t do much to former President Donald Trump legally.

“It’s unclear how much of it to actually move the needle in holding Trump accountable,” Zaheed told Axios. “The primary purpose of it is going to be fundraising for a lot of the Democratic Party institutions and establishments.”

Other Democratic committees have tied fundraising appeals to the televised hearings, including the Democratic Legislative Campaign Committee and the Democratic Association of Secretaries of States, the outlet reported.

So that’s the bottom line here. They have nothing, yet they’re trying to soak the base. And when they deliver nothing, just like with Russia collusion, their base is going to turn on them like wolves and eat them alive. They just ensured themselves even more anger, come November.