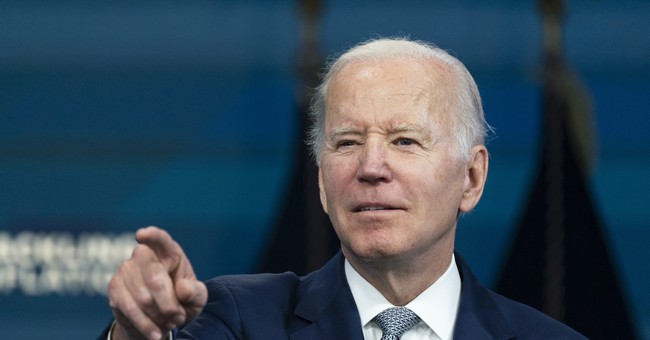 On Monday, Joe Biden’s approval hit another record low, while gas and food prices hit record highs, and the stock market went right into the dumper.

But Biden showed what his priorities were in the face of all that bad news. Pens. Yes, pens. He was upset that he’d only gotten one pen to sign his bill when his former boss, Barack Obama used to get several, as he signed a bill to create a commission to study having a National Museum of Asian American History.

Perhaps this is more Biden Shrinkflation? All the rest of us are having to deal with Shrinkflation in the Biden economy: The products we are buying contain fewer items or have shrunk in size, while we are paying the same or more. Bottles of soda are smaller, toilet paper is fewer sheets per roll.

Biden also had a problem when he was talking about civil rights activist and former U.S. Commission on Civil Rights member, Karen Narasaki.

He called her “Karen Nagasaki” and then referring to one of the other guests also named Karen, asked, “Where are the Karens?” Yikes.

Is he even able to see the teleprompter anymore because such gaffes are becoming more and more frequent? Add that to the pen comment and he appears to be losing it even more quickly now. He didn’t even realize what he said or the negative implication of it. Not to mention that “Karen” of course has become something of a derogatory term, so that also wasn’t a good take from Joe to refer to the two women as “the Karens.”

But again, showing where his priorities were, at the end of the event, on Monday, he didn’t need his team to shoo away the press as they normally do. The guy with the slow gait beat it out of there faster than I think I’ve seen him move recently, so he could avoid answering questions.

Yes, how dare he have to respond to any of the disasters that he set in motion and/or made worse. This is the guy who claimed they were going to be transparent and bring back “norms.” The only thing that he’s brought is destruction across the board.