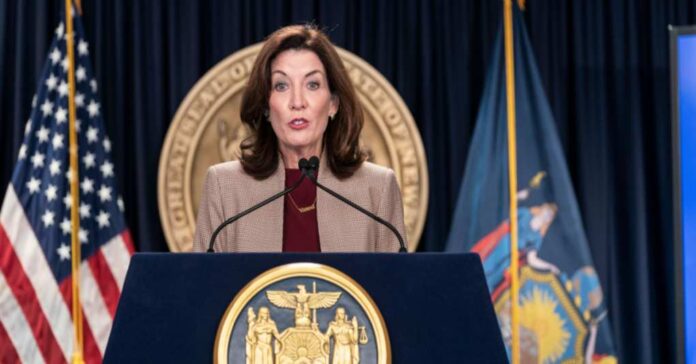 New York Governor Kathy Hochul is solidifying her place in the history of knee-jerk reactions officially as of June 6th. With a stroke of the pen, she approved a package the NY Assembly passed on June 2nd in response to the mass shooting in Buffalo, NY. This shooting took place on May 14th and left 13 dead – and rocked the city to its core.

While the May 2nd shooting at the Robb Elementary School in Texas that left 19 kids and two adults dead was also fresh, it wasn’t like Buffalo for them.

Upon signing the package, Gov. Hochul spoke about what she feels this signifies. “This is a moral moment for the people of New York but also the rest of the nation. Follow what we did here in New York, and we’ll finally start to be at the beginning of the end of all this gun violence and the massacres that are occurring every day in our country.”

This package has a lot of details to it, but it’s more of the same old Democrats trying to look good fluff.

The most prominent of the laws is the new one that bans the purchase or possession of semi-automatic rifles by anyone under 21. Additionally, the state is requiring state and local law enforcement to share gun crime info with federal databases and provided provisions for health care professionals, police, and district attorneys to file for Extreme Risk Protection Orders.

Additionally, they have now banned the sale of body armor, and are requiring a license to purchase “assault rifles.” It also makes the threat of mass harm a criminal offense, with stiffer penalties if caught while taking steps towards making it happen. They will do this by creating policies for social media in NY to monitor what people are saying on social media and requiring them to report hateful incidents.

Gun dealers will also need to implement new storage laws, requiring more training for their employees, and dictate the requirement for inspections by state police at least every three years. This isn’t much of an add-on as any firearms store worth their salt has employees with more training than the Governor could fathom, and they store weapons better than the National Guard does.

New York State’s Gun Involved Violence Elimination initiative was another beneficiary because of these latest bills. Per the governor’s website, $18.2 million has been secured to fund 17 participating counties across the state. Funding will go towards 20 local police departments across these 17 counties that account for over 80% of the violent crime in New York.

Assemblymember Chantel S. Jackson could not reach back fast enough to congratulate herself on the passage of this bill. “In New York State, we already require a permit to purchase a pistol or a revolver. My legislation will institute the same requirements for semi-automatic rifles. Both in Buffalo and Uvalde, Texas, 18-year-olds went out and bought semi-automatic rifles, and between the two attacks, murdered 31 people. Instituting a permit process is a logical, commonsense provision to keep New Yorkers safe.”

Unfortunately, her mindset here is incredibly misguided. New York already requires permits to possess, carry and purchase any type of firearm and blocks most under the age of 21 from receiving permits. In NYC, nearly no one can get a permit to carry in the city because of the city’s laws. Yet, they have more gun crimes than the rest of the state. The city has no gun shops, or places to buy ammo either. Interesting that they are leading the way there…

It’s just possible that these knee-jerk reactions aren’t going to solve anything. They serve to do nothing more than to make the people who wrote them feel better. There is no help coming from them, and they don’t address the real problems. But Gov. Hochul and her leftist mob aren’t ready to discuss the real problems.