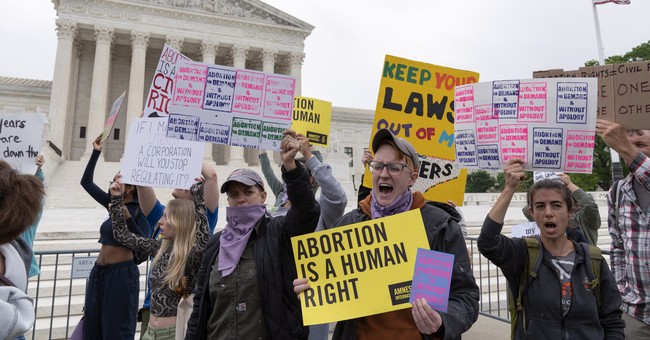 I regret to have to bring this news on a Saturday, but a left-wing group has announced an insurrection on Monday at the Supreme Court.

No, I’m not being facetious, nor am I stretching the definition of the term. Rather, I’m reporting this based on the standard laid out regarding January 6th, which is that an insurrection occurs when protesters take action to stop the constitutional process of government from occurring.

Sure enough, that’s exactly what “Shut Down DC” is planning to do. They aren’t mincing words either. Their stated goal is to shut down the Supreme Court in order to stop it from releasing opinions. In this case, their primary concern is the Dobbs decision, which is going to overrule Roe v. Wade-unless all the recent threats have caused one of the justices to change their mind.

The activist group “Shut Down DC” plans to “blockade the streets around the Supreme Court” on Monday, according to its website, as part of a protest that aims to “shut down” the Supreme Court as it prepares to hand down a ruling that could overturn Roe v. Wade.

The protest is planned amid rising fears about the safety of Supreme Court justices following the arrest, in the middle of the night Wednesday outside the home of Justice Brett Kavanaugh, of an armed man who reportedly said he intended to kill the justice.

Hey, look, I didn’t make the rules. This is, by the often-stated Democrat standard, an insurrection. It is taking direct action to stop the government from functioning, holding up the constitutional process, and it is not logical to assert that such a standard only applies to the certification of elections and nothing else. If shutting down Congress is an insurrection, so is shutting down the Supreme Court.

Now, will they succeed? Probably not, given that the justices won’t even be there again until Friday. Further, I’d assume any decisions can be released remotely if that’s what it takes. Still, the intent is blatant here, and it would be incredibly hypocritical for the left to not denounce this. Of course, they aren’t denouncing it because they are…hypocrites, but I digress.

I do find it interesting that this is set for Monday, when the court is scheduled to release more decisions. That doesn’t appear to be random, considering they could have done this the last several days that decisions were released. Did they wait until this Monday because they were tipped off that Dobbs is going to drop? I certainly hope the Supreme Court didn’t suffer another major leak like that. I guess we’ll find out. In the meantime, enjoy the press and the left at large twisting themselves into knots to explain why surrounding the Supreme Court to shut it down is fine and not at all an insurrection.