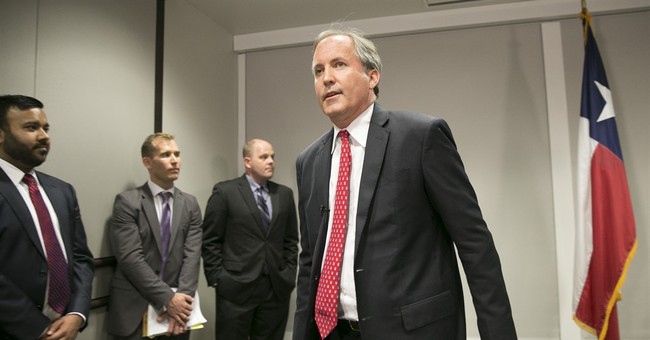 Earlier on Friday evening, I shared the disheartening news on a Texas judge’s restraining order keeping Republican Governor Greg Abbott’s directive to his state’s Child and Family Services Department to investigate the health and welfare of any minors in the process of receiving hormone-altering drugs or having gender transition surgery from taking effect.

Well, there’s some positive legal news out of the Lone Star state, as well, As RedState readers know by now, the Biden Administration’s Department of Homeland Security is-to put it delicately-selective about when it thinks agents should enforce immigration law on the border — and on Friday, a judge’s decision put that on hold.

Texas Attorney General Ken Paxton had something to say in the wake of the ruling, in part calling the Abbott administration’s win a “massive defeat” on the DHS’ shirking its role in “detain[ing] criminal illegals.”

In a related story by Fox News Digital, more than Republican lawmakers in both the House and Senate again sent a letter to the DHS Office of Inspector General (OIG) on Friday, demanding an investigation into the Biden Border Crisis.

More than 100 Republicans in the two chambers had written to DHS Inspector General Joseph Cuffari in January requesting “a comprehensive review of the decisions by the Biden Administration that have led to the worst border crisis in United States history.”

A spokerson for the DHS OIG confirmed to Fox News at that time that it had received the letter: “We take all requests from Congress seriously and review them to better inform our work, including ongoing and future work,” the spokesperson said.