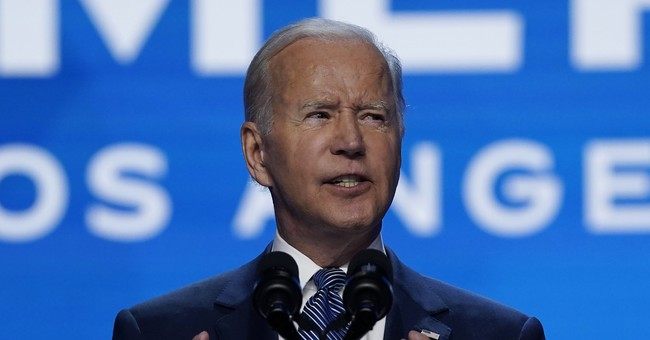 Joe Biden was speaking at the Summit of the Americas on Thursday.

As we’ve already noted, it hasn’t been going well. Biden stumbled up the stairs as he was boarding Air Force One for Los Angeles. Then, Biden was met by a protester rushing the motorcade who had to be subdued. Meanwhile, a lot of the countries didn’t show up because of the poor way that the Biden team dealt with the event. While objecting to the human rights violations of Cuba, Nicaragua, and Venezuela is a good thing and we should encourage that, how weak is it if we’re giving the Northern Triangle countries $1.9 billion and they can’t even show up to the event in our country? On top of that, as Obama global engagement director Brett Bruen explains, the invites went out very late and it’s not even clear what “deliverables” are supposed to be coming out of this event. He calls it a “catastrophic failure” on the part of the Biden Administration.

How badly did they handle it? Why are they only calling people a couple of weeks before? That’s just bad event planning.

Well, when El Salvador — to whom we are giving a ton of money — wouldn’t even take Secretary of State Antony Blinken’s call and even the New York Times is writing about it, you know it’s a debacle.

These are the adults who were supposed to be in charge? These are the people who claim they’re improving our relationships around the world? They have no idea what the heck they are doing on any given subject.

Unfortunately, this is one of those events where Biden is expected to make remarks. Once again, it seemed to be Biden vs. the teleprompter and his confusion.

Biden trips all over himself trying to get this out, “[S]upport policy reforms and improve investment and climate in countries. Uh, excuse me. The investment climate. The climate of investment in these countries.”

I don’t know what he was trying to say here. I’m not sure even he knows. When he acts like this, probably the fewer people who are there, the better. Perhaps that’s the only saving grace of people now blowing the U.S. off over this.

Biden was just whining about the media, claiming they aren’t covering him appropriately and trumpeting all his achievements (name one). But then when suddenly he stared off vacantly into space after talking with Canadian prime minister Justin Trudeau, his media handlers began scrambling to once again toss the media out of the room.

They let them film for a total of four minutes. And the Biden team wonders why even the liberal media has lost patience with them? Maybe they should check their behavior.