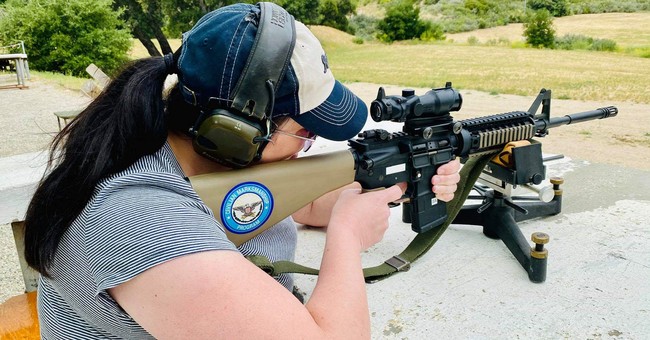 Dear Peace-loving Ladies and Gentlemen of America and the Internet,

Did you hear the one about SAFE & EFFECTIVE? Or, I STAND WITH UKRAINE? Or, INFLATION IS TRANSITORY?

Whenever I see that on social media, the plurality of responses from advocates of the Second Amendment is some version of ‘I don’t have to need it. I want it.’

While true, I’d argue that you/we/I actually do NEED an AR-15 (or a modern semi-automatic rifle). * Before we move on, be sure to challenge your anti-gun opponent with a quiz question about what ‘AR’ means. Answer below, in case a reader of this blog is on-the-fence, considering a change from being anti to pro.

Anyone who is currently — or down the road stands the chance of being — in a group considered minority or disadvantaged (without the benefit of politically-protected-class status), must have a way to effectively defend him or herself.

As a Los Angeles woman, whose weight at 5’7′” hovers around 102 pounds, I find the AR easy to load, hold, aim, and fire with accuracy. It’s light and manageable, despite what one idiot (truly possessing a low-IQ) California congresswoman argues.

Los Angeles is never NOT on the verge of exploding over something; and because of the ideologically twisted, pro-criminal District Attorney enabling predators, my rifle serves as an emotional crutch.

Further, as a Jew in this state, I am part of minority group that’s neither protected nor tolerated. In fact, without going down the rabbit hole of Marxism-permeated public education curriculum, let this story speak for itself.

I’m also part of an unpopular group of people who embrace and adhere to the principles of medical freedom. I’ve done my homework. I follow science — the kind practiced by professionals who are loyal to facts and data. My decisions about how to navigate my risk related to the virus are just that: mine. They do not affect anyone else. Anyone who believes otherwise has not been exposing him/herself to independent journalism or apolitical peer review — the last bulwark against propaganda.

But since no amount of aforementioned facts, data, or empirical evidence has budged our officials, I live in fear. Their measures have become a hard-wired religious ritual. And they’ve weaponized the population, reminiscent of Brown Shirts in World War Two Nazi Germany.

Unarmed citizens in Australia were sent to quarantine camps. Zero-Covid-obsessed Communists have locked Shanghai residents into their apartments, in some cases welding closed their doors. Canada is moving to ban gun sales, after de-banking and in some cases, jailing, truckers who refused to be injected. Police beat people in the streets of Amsterdam for non-compliance.

And as we speak, the Biden Administration is back at the drawing board, trying to rework amendments to the World Health Organization (run by a non-medical-doctor bureaucrat) Global Pandemic Treaty (which is not a treaty) that cede American sovereignty over our country’s public health policy.

Do note, in no way do I believe our federal government is the least bit competent in this regard. (That goes for the administration that didn’t fire Fauci.) I’d just rather not have an arm of the U.N. forcing me to put an experimental and detrimental technology into my deltoid. Thanks.

Gun control does not end well for people who are not in favor. And, a 5-round .22 cal revolver is not likely to intimidate a bad guy who just got out of prison — again — was sent over the border by the cartel, or who shows up on your doorstep from your very own government.

And for a reality check.

Speaking of non-whites and guns:

Recently, jaws on both sides of the aisle dropped when Joe Biden nullified the U.S. Constitution (yet again — see above re: sovereignty giveaway) by claiming the Second Amendment is not absolute. Actually it is and there shall be no infringement.

Another thing that is absolute: my right to defend myself, my family, and my property. This is not granted by government. And given the government has done a lousy job stopping the maniacs with illegal weapons and deranged minds, I’m in no mood to count on them.

If you allow them to take away your AR-15, your 9 mm rifle, your Kalashnikov, what’s next?

You do need them.

* ‘AR’ is short for Armalite, the manufacturer. It is not an abbreviation for assault-rifle.

If this is news to you, then you’ll also be surprised to learn that the terms ‘assault rifle,’ ‘high-capacity magazine,’ ‘semi-automatic,’ and ‘ghost gun’ are phrases conceived by the very people who wish to disarm you. They are marketing devices.

There’s no standard legal definition of an ‘assault rifle.’

Eleven rounds would be considered ‘high.’ So think about the panicked victim whose last shot is #10 and misses.

Every non-bolt-action gun in circulation is a semi. It means that ONE round loads into the chamber as soon as one is fired.

The bad guys have machine guns, aka automatics. And speaking of AKs, a Kalashnikov (aka AK-47) is a semi. It’s not a machine gun.

Oh, and finally — ‘red flag’ laws will allow your ex-whatever to fabricate a grievance, and rat you out to the DOJ. Your chances of vindication are slim to none in that case.

Emily Barsh is a media consultant based in Los Angeles. She says you may troll her on Twitter and Instagram @EmilyTVProducer.